There will be 7,000 to 10,000 copies of each doll, to be sold in specialty stores and on two Web sites, amctv.com and barbiecollector.com. 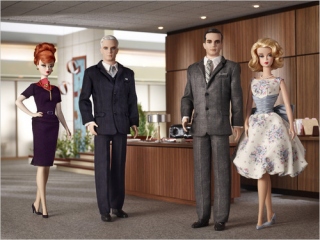 Mattel has announced today that they plan to release a line of dolls as part of a premium-price collectors’ series for adults called the “Barbie Fashion Model Collection.” Included will be a set of dolls based on characters from the critically acclaimed AMC show “Mad Men,” a series about advertising in the 1960s.

Although there have been Barbies and Kens based on other TV series, among them “I Love Lucy” and “The X-Files,” the dolls will be the first licensed line for that collection, Mattel says, with a suggested retail price of $74.95 each.

Mattel is licensing rights to the characters from Lionsgate, the studio that produces “Mad Men.” The characters to become dolls are Don Draper, the show’s leading man; his wife, Betty; his colleague at the Sterling Cooper agency, Roger Sterling; and Joan Holloway, the agency’s office manager who was Roger’s mistress. There will be 7,000 to 10,000 copies of each doll, to be sold in specialty stores and on two Web sites, amctv.com and barbiecollector.com.

“The dolls, we feel, do a great job of embodying the series,” said Stephanie Cota, senior vice president for Barbie marketing at Mattel in El Segundo, Calif.