Mattel has issued the following statement today regarding their soon to be released Ghostbuster PKE Meter prop replica.

Mattel has issued the following statement today regarding their soon to be released Ghostbuster PKE Meter prop replica.

For all the Ghostbusters fans in the US, we’re bringing you a prop replica of the PKE Meter that’s as film-accurate as possible. For countries in Europe, there are stricter regulations on product warnings so we had to make a tough decision: put lots of warnings all over it and compromise the accuracy, or restrict shipping. It was hard because we love our fans in Europe, too, but in the end we decided to make it as film-accurate as possible. Here are the countries that can’t accept shipment:

We are sorry this means that it can’t ship to Europe, and we are hoping fans in the US appreciate the effort we made to bring them an awesome product. 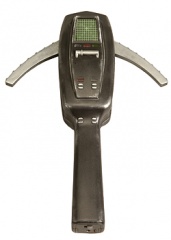