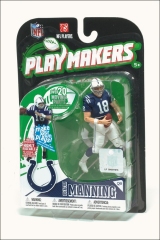 McFarlane Toys has revealed loose and packed images of their upcoming Wave 1 NFL Playmaker figures. Similar to their previously released MLB PlayMakers, the NFL figures will feature some of today’s most popular NFL players with 20+ points of articulation!

“McFarlane Toys is proud to present our debut series of NFL PlayMakers! This series follows up the popular MLB PlayMakers line, which introduced our first heavily-articulated sports figure. NFL PlayMakers possess a similar range of motion, allowing you to pit the NFL’s best against each other in realistic action poses.

The NFL PlayMakers lineup features the absolute best from the NFL, including:

Got shelves with nothing on them? Get some PlayMakers. Learning to root for new players you just drafted on your fantasy team? Buy their PlayMakers. Does your three-year-old yearn to play with your SportsPicks? He or she needs some PlayMakers.

But seriously, NFL PlayMakers arrives just in time for the start of football season, with the authenticity our established collectors demand, and the playability our younger collectors enjoy.”