Some updates today from McFarlane Toys regarding a last minute change to their upcoming NFL 25 series. Percy Harvin has been replaced by Randy Moss, a move that was bound to happen but because an obvious change with the New England Patriots training Moss to the Minnesota Vikings this week. No word on what’ll happen to the previously announced Harvin figure, but it’s a safe bet that if he does show up it probably won’t happen until next year. Meanwhile, the Moss is a purple repaint of his old New England Patriots figure from NFL 17. 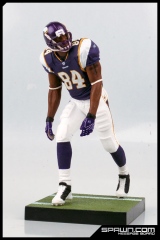 McFarlane Toys also unveiled the new exclusive Beanie Wells SportsPicks action figure today. It’s the SportsPicks debut for the Arizona Cardinals’ running back, and it will be available this weekend at our McFarlane store in the Westgate City Center for $14.99, then releasing nationally through our online store on Monday, October 7th for $11.99 (plus shipping). 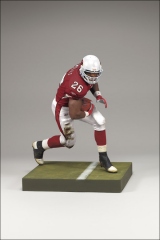