Not to be outdone by NYCC that’s going on right now, Mattycollector just dropped a bomb on an announcement revealing a ton of new product! 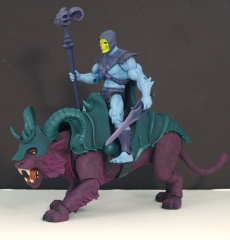 Not to be outdone by NYCC that’s going on right now, Mattycollector just dropped a bomb on an announcement revealing a ton of new product that include the upcoming Green Lantern Wave 2 set, Masters of the Universe Classics Panthor, Ghostbusters’ Courtroom Peter and more.

Panthor® – March 2011 Club Eternia™ Monthly Figure
Back at SDCC, we showed a helmet in the display case. We can finally reveal that this spectacular large-scale beast is its owner! Includes saddle, newly sculpted head, and an all-new vintage style removable mask.

Ghostbusters™ Courtroom Peter
This new 6″ scale Peter Venkman™ figure is our first single-carded Ghostbusters™ 2 figure! Comes with a brand-new Scalari Brother Ghost figure with swappable feet (flying feet and standing feet). NOTE: This figure will be released in January and Ghostbusters™ 2 Winston with Slime Blower has been moved out (release date TBD).

Walmart-Exclusive DCUC 2-Packs from Wave 1
All new 2-packs of best-selling, previously-released DCUC figures available only at Walmart! Just like all other previous 2-packs, these packs contain figures and accessories only, not the Collect and Connect™ figure parts. Packs include Gentleman Ghost/Hawkgirl, and Superman/Parasite.

MOTUC vs DCUC – Wave 2
Originally shown at SDCC, the next two MOTUC 2-packs feature original art from DC Comics and a collectable poster of both characters fighting it out! Packs include Hawkman vs Stratos® and Aquaman vs Mer-Man®.

MOTUC Weapons Pak Great Wars Assortment
The product was shown at SDCC and now here’s the package. It’ll be available November 15th 2010, so click here to see the full description.