MLB 27 is an eight-figure lineup, available at national and specialty retailers everywhere in late April. 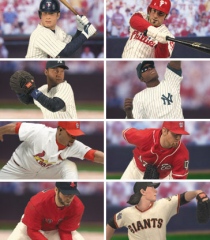 McFarlane Toys has released images of their upcoming newest lineup of SportsPicks figures. MLB 27 is an eight-figure lineup, available at national and specialty retailers everywhere in late April.

McFarlane’s Collector Level is well-represented in MLB 27, with Pujols, Utley, Jeter and Pedroia having individually-numbered rare versions for fans to collect. There are two versions of Stephen Strasburg’s figure available, and Joe Mauer has an alternate uniform available only at Target. But enough of the “lineup announcements” – let’s take a look at our very own All-Star team: