McFarlane Toys has unveiled official images of their new line of collectible action figures inspired by the hit comic book series, “The Walking Dead,” which was adapted into a highly acclaimed AMC television series last October.

The Walking Dead comic book series tells the story of the months and years that come after a zombie apocalypse. It follows a group of survivors, led by Officer Rick Grimes, who travel in search of a safe and secure home.

The Walking Dead Comic Series 1 figure lineup includes two of the more popular characters from the comic book, along with two horrific zombies. They will each come with several points of articulation:

Fans can expect The Walking Dead figures to make their way to retail shelves this September. 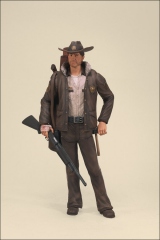