Now Mezco has announced that a special run of 52 exclusive Living Dead Dolls, not sold in stores, will be given to 52 video participants selected by Mezco’s Secret Cabal Of Judges. 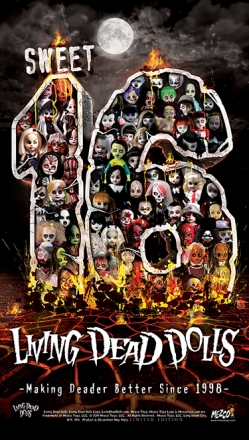 Now Mezco has announced that a special run of 52 exclusive Living Dead Dolls, not sold in stores, will be given to 52 video participants selected by Mezco’s Secret Cabal Of Judges. One factor of the judging process will be the number of views and the number of likes a video receives, but that will not be the deciding point, as the Secret Cabal Of judges acts in mysteries ways that cannot be fully understood by mere mortals.

Each week, Mezco will be posting a new video, made by a fan, talking about how the Living Dead Dolls have touched their lives. Some stories will be inspirational, others amusing, some heartwarming, some scary, but most importantly, all of them great!

Fans should submit their own videos, up to 60 seconds in length, at LivingDeadDollsSweet16@gmail.com along with their name, age, shipping address, and phone number prior to October 1st, 2014.

Creators of videos that are selected to be added to the Living Dead Dolls Sweet 16 Channel may receive invitations to special events and exclusive or sneak preview offers.

Final judging of all videos will take place in January 2015.

Living Dead Doll fans can tune in to

To check out a new video each week.

1) Don’t backlight. Illuminate from the front, don’t pose in front of a sunny window.

2) Speak clearly. Without good audio it is hard to have a good video.

3) No music, please. Also, please avoid having a tv or radio playing in the background.

By submitting your video: (1) You acknowledge and agree that Mezco Toyz LLC, Living Dead Dolls and the producer may use your video and/or your name and/or likeness in connection with this project, including but not limited to on their websites, third party sites, and social media; and

(2) You represent and warrant that you have obtained permission for, or are entitled to consent on behalf of such use from everyone featured in your video.

All submissions become the property of Mezco Toyz LLC and are not returnable.