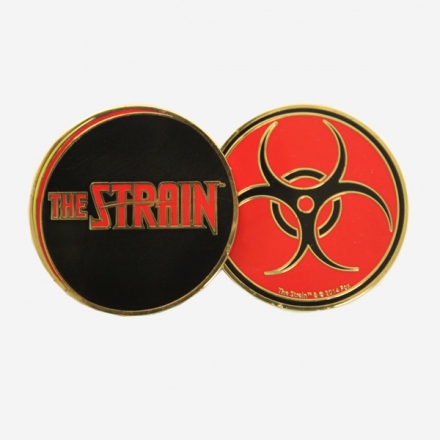 The Strain is a high concept thriller from co-creators, Executive Producers and Writers Guillermo del Toro and Chuck Hogan and Executive Producer/Showrunner Carlton Cuse. The series tells the story of Dr. Ephraim Goodweather, the head of the Center for Disease Control Canary Team in New York City (home of Mezco headquarters). Goodweather and his team are called upon to investigate a mysterious viral outbreak with hallmarks of an ancient and evil strain of vampirism. As the strain spreads, Eph, his team, and an assembly of everyday New Yorkers, wage war for the fate of humanity itself. The Strain airs Sundays at 10:00 pm ET/PT only on FX.

Mezco will also be offering the first-ever collectible coins for The Strain at San Diego Comic Con beginning on July 23th. The limited edition collectible features the series logo on the front and the biohazard symbol, as seen in the series, on the reverse.

Each coin is a stunning testament not only to the ancient evil of The Strain, but also to the artisans who hand craft each coin. Each hefty coin is crafted of solid metal and die struck. Each individual color is added by hand before being fired at over 500 degrees Fahrenheit for 24 hours to ensure maximum durability. In the final step, the coins are polished to an inhuman luster and then sealed in their airtight containment units.

Only 300 of these limited edition coins exist, and they are available exclusively at the Mezco Toyz booth 3445 and at http://www.mezcotoyz.com/the-strain-limited-edition-collector-coin while supplies last.