We first showed off the new Mars Attacks toys from Mezco in our Toy Fair 2012 coverage. Mezco must have liked what we had to say because they quoted us in their official press release! 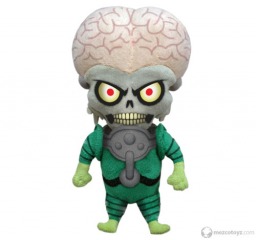 New York- Based on the iconic trading cards, Mars Attacks, that forever changed the face of science fiction. Mezco brings these Martians to life with this 8inch scale plush figure. The other-worldly creation features the Martian’s signature exposed oversized brain and bulbous eyes, along with the iconic green spacesuit.

Mars Attacks trading cards have made an indelible impression on pop culture since their initial release in 1962, inspiring a hit film, comics, graphic novels, and more. Coinciding this summer with the landmark half-century milestone of the original release, Topps is pulling out all the stops for collectors to re-connect with the cult classic while ushering in a whole new generation of fans.

The Martians invade your local retailers in October 2012.

About Mezco Toyz;
Mezco Toyz LLC, specializes in the design, manufacture, and marketing of toys and collectables for all ages. A design-driven company that continuously thinks outside the box, Mezco is a leader in collectable action figures, doll manufacturing and marketing. Creators of brands such as Living Dead Dolls, Hoods, Creepy Cuddlers, Mez-Itz and more, Mezco also produces many of today’s most popular collector-friendly licensed products including: South Park, Hellboy, Popeye, Family Guy, Scarface, DC Universe, Little Big Planet and Thundercats to name a few. With a consumer outreach that is comprised of wholesale, distribution and direct to consumer networks; Mezco’s product placement abilities span worldwide. The award-winning company has offices in the United States as well as in Hong Kong, overseeing all aspects of design, marketing and manufacturing.
About The Topps Company, Inc.
Founded in 1938, Topps is a leading creator and marketer of sports and
related cards, entertainment products, and distinctive confectionery
products. Topps entertainment products include Major League Baseball, NFL, NBA and other trading cards, sticker album collections, and collectible
games. The Company’s confectionery brands include “Bazooka” bubble gum, “Ring Pop,” “Push Pop,” “Baby Bottle Pop” and “Juicy Drop Pop” lollipops.