Ever wanted an action figure of Steve Jobs, Apple CEO and marketer extraordinaire? Well now you can thanks to M.I.C. Gadget’s small run of Steve Jobs action figures. Limited to just 300 (as of now, the first 300 are sold out but more are on their way), the action figure, which is really more of a statue, retails for $80 and depicts Jobs in his classic blue jeans, trademark block turtleneck and I’m-better-than-you rimless glasses. He comes with an Apple logo stand, a few speech bubbles cards, and in his tiny little plastic hand he holds an iPhone… which ironically he’s “holding wrong.” The figure is amazingly detailed even if it has sort of a bobblehead look. It’s a must have for any Macaphiles and Apple fanboys and girls (because who’s really want a jobs action figure but them, amiright?). 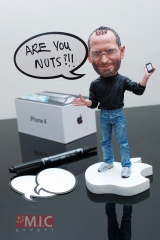