The all-new Stitch mini figures are sized at 3″ tall featuring Disney’s standard and vault characters. The Stitch vinyl trading figures (VTF) come in a blind box and in a display tray of 16 blind boxes. In each display tray there is one complete set with doubles of the most popular characters, two variant figures and the chance of a randomly inserted “super-secret chase figure.” 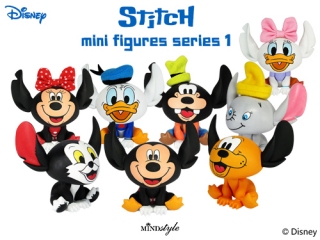