From self published comics to amazingly sculpted statues, check out Mindzeye Studios and get a look at their Gears Of War Exclusives for Comic Con 2009.

Last year I was walking the aisles of the San Diego Comic Con and I came across a statue that made me drool. It was a blue metallic take on Mike Mignola’s Hellboy and I wanted it… I wanted it badly. Sadly, Neal Adams had somehow guilted me into spending my last hundred on a signed edition of his Black and White Batman Statue. Don’t get me wrong, I love that statue, but I still dream about that Hellboy.

Standing at that booth, slowly drooling all over the amazing statues is where I met Pete. Pete introduced me to a whole new world with his his company, Mindzeye Studios and I was instantly hooked. Here were a small group of creative people that had not only broken into the industry with a comic book that they created and published themselves, but they were also making amazing sculptures. What’s more, they weren’t just making statues for their own self-published title, they were making Hellboy statues, one of the most sought after licenses around.

Well, a year has passed by and Mindzeye is gearing up for another Comic Con. This year they’ve got a different big time license to show off, The huge hit video game: Gears of War! They have three amazing statues coming up that are exclusives for this year’s SDCC. We’ve got reviews for all of them, but first we wanted to sit down and have a chat with Pete about all things Mindzeye and about the awesome exclusives they’ve created for SDCC 2009!

Pete: Mindzeye Studios was created out of the interest to produce an online graphic novel and introduce statues based on the characters from the Hybrid storyline. We felt strongly about the content of the graphic novel, as well as the dynamic statues that could come from it. 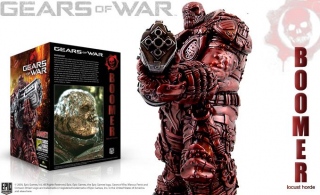 Pete: We actually went through quite a few names before deciding to go with Mindzeye Studios. The idea behind the name comes from “the mind’s eye,” which refers to a person’s imagination. That link was appealing to us, since we have a high regard for creativity and imagination.

YBMW: Was it hard to break into the industry?

Pete: It’s very gratifying to introduce a completely new product into the market, but that doesn’t mean that the market opens its arms and is wholly welcoming. Starting out as a small business, it’s difficult to get a foothold. Having said that, there were quite a few people along the way that embraced what we were doing and went out of their way to do what they could to keep us moving. Breaking into the industry is not easy, but we’ve appreciated all the help from industry professionals and fans alike that have helped us get to where we are today.

YBMW: Do you hand sculpt your statues or are they digitally done, or a combo?

Pete: All of our statues have been hand sculpted, except for the Marcus Fenix statue in our Gears of War line. That was our first experience with rapid prototyping. It turned out pretty well, but we still had to spend quite a bit of time modifying the final build. We tend to like sculpting from scratch better. It gives us better control of the figure and we like to alter things as we go, which allows for more freedom. The Marcus statue, did turn out quite well and we’ve heard that echoed from the fans, so we haven’t taken rapid prototyping off the table by any means. 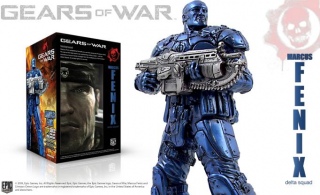 YBMW: What is the process for making the metallic statues like this year’s Gears of War SDCC Exclusives?

Pete: Creating the SDCC Exclusives is a time intensive process that involves an actual bronze powder to be mixed with a plastic polymer, which creates a metallic outer shell to each of the pieces. Although each piece is solid, the bronze-like look and feel is only applied to the outside to give it that impressive, statuesque look and feel. If it were solid bronze, the price to produce and then sell each piece would be dramatically higher. The SDCC Exclusives also use a special dye that provides radiant colors – such as the blue and red found in the Final Hope and Rage variants.

YBMW: How did you come to work on Gears of War?

Pete: Shortly after seeing some screenshots of Gears of War, we contacted Epic Games about creating a partnership to create bronze statues. We felt their characters would translate very well to the medium. A proposal was written and presented and the rest, as they say, is history.

YBMW: How did you decide on these statues for SDCC?

Pete: We wanted something interesting and exclusive for the SDCC attendees. We worked with Epic to come up with a color scheme that would work with the characters from the game. We also set a limit of 100 pcs. for each version, so that each piece would be very exclusive and rare.

YBMW:What else is coming up in the line?

Pete: We have plans to produce Cole, Berserker & possibly another character or two. We’ve received great feedback from fans concerning the current line and would like to extend it further. 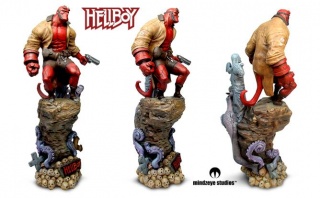 YBMW: How did you get involved in Hellboy?

Pete: Mike Mignola was nice enough to take some time and take a look at a sculpt that I had done several years ago. I’d read some of the Hellboy graphic novels and immediately sat down and sculpted what would eventually turn out to be the statue that we now offer on our site. Mike was very gracious to allow us to produce a statue based off of his fantastic character. We were all very excited to add Hellboy to our growing list of statues that we offer.

YBMW: Will there be any more in the line?

Pete: We would love to extend the Hellboy line, but Mike tends to like to keep the market less cluttered with Hellboy merchandise, which we can respect. You don’t want to saturate the market. Perhaps down the road we might contact Mike with another project, but that most likely won’t happen anytime soon.

Pete: Hybrid is our online graphic novel that is essentially a story about 3 brothers that are human/dragon hybrids and how their personalities and agendas take them in very different directions. There is also a bounty hunter that is a major player in the storyline. More pages are planned and the story is a lengthy one. Unfortunately we don’t have very timely updates due to our hectic schedule with the statues, but we have much more planned with the story arc and characters.

YBMW: How has it been received by comic readers?

Pete: It’s been well received, but to be honest, most people and industry professionals have really gravitated toward the statues, which we feel really capture the dynamic look and feel of the graphic novel. 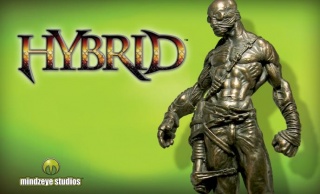 YBMW: Has it been harder making it on your own instead of going through a publisher?

Pete: It has had its challenges without bringing a publisher on-board, but the nice thing about it has been the freedom that has also allowed. It’s a small, online comic that we hope people enjoy. We want it to continue to be something that people enjoy reading. If we extend the story into a published graphic novel at some point in the future, that would be a nice addition for us, but right now, we like the fact that it’s just something we offer to people that visit our site – no commitment and no questions asked.

YBMW: Can you tell us about the Hybrid Statues that you’ve created?

Pete: The Hybrid statue line is something we’re very proud of. It’s difficult to release product into the marketplace that isn’t based on a known IP where you all ready have an established audience. Beginning with your own graphic novel and then producing statues based on that publication is a risky move, but one that people have generally accepted and been drawn to. And we’ve also enjoyed the ride and feedback we’ve received. Since this was our first statue line that we released, it was both challenging and gratifying. There were many pitfalls, but we couldn’t be happier that we gave it a shot.

YBMW: What do we have to look forward for the rest of this year and looking down the road for Mindzeye?

Pete: We’re in discussions with a few of the larger comic producers about the possibility of working together. Currently we’re working up details concerning licenses and hopeful that something will come to fruition. We have a few incredible projects that we know fans will love. Hopefully we’ll get a chance to produce those statues and release more of the kind of quality work that we’ve been known for so far.