Another Green Lantern alien character action figure has been revealed, this time it’s the somewhat obscure Green Lantern Corp member, Rot Lop Fan! Rot Lop Fan is probably the only blind Lantern, who has no concept of light or color, which is ironic considering how the power of the ring operates. Rot Lop Fan appears to be fairly articulated with several ball joints and cut joins. There’s no denying that he’s one adorable and creepy Corp member! 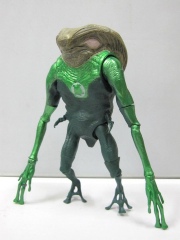