NECA bring you a new assortment of motorized Gremlins figures, each depicting the most famous Mogwai of them all, Gizmo. 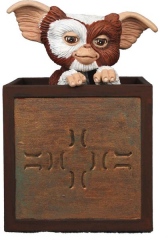 NECA has revealed some images and information regarding their new line of Gremlins licensed products featuring three different motorized Gizmo figures: Gizmo when wet, Gizmo in a convertible and Gizmo in his box.

“We can’t officially advocate you getting them wet, feeding them after midnight or exposing them to bright light, but we can say your life might be more interesting if you did.

Who would’ve thought that 26 years after its original release, Gremlins would still be as much fun as the day it came out? One of the most landmark movies of the 1980s, it has grown with the generation who first loved it into a genuine cultural phenomenon.

And if we here at NECA know about anything, it’s genuine cultural phenomenons.

In that interest, we bring you a new assortment of motorized Gremlins figures, each depicting the most famous Mogwai of them all, Gizmo. Pick your poison:

All arriving in blister packaging, we’ve got Gizmo in his gift box, Gizmo standing on his own two feet, and Gizmo driving in his red convertible. Safe to say, whatever your Gizmo wishes might be, they’re covered.

Each figure features pull-back-and-go motorized action and, of course, a totally accurate and adorable movie likeness to his fuzzy self. If you think you’re up to the responsibility of owning one… you probably are (cue spooky music).