NECA has released turn-by-turn images of their upcoming Mohawk “Gremlins” figure. Mohawk will appear in his Mogwai form.

NECA has released turn-by-turn images of their upcoming Mohawk “Gremlins” figure which we first saw at NY Toy Fair 2011. Mohawk will appear in his cute yet deadly Mogwai form. He will be articulated at the eyes, ears, and come with ball neck, shoulders, elbows, hits and wrists! Mohawk is part of NECA’s new “Gremlins” series due out later this year.

One of the first figures to be released will be the SDCC 2011 Gizmo exclusive. 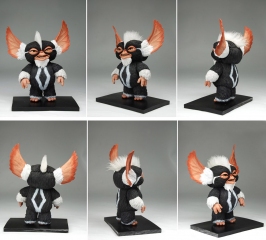