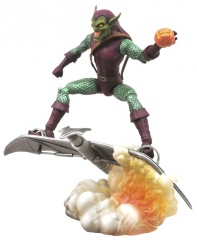 Diamond Select Toys has revealed some new images of their upcoming Marvel Select Green Goblin figure. Along with the reveal, there’s also a short Q and Q with DST’s Chuck about the figure.

Diamond Select Toys recently revealed the figure that will follow Colossus in their 7-inch-scale Marvel Select line, and it’s the Green Goblin, longtime Spidey foe and mainstay of the Marvel Universe. While he won’t be out until summer of 2012, we thought we’d sit down with DST director Chuck Terceira to find out how the figure came into being.

This figure is based on an earlier Art Asylum statue, correct? What prompted you to revisit those pieces?
DSTChuck: Robert Yee and I wanted to bring some of the designs we did for the old  Art Asylum-DST Marvel statue line into the Marvel Select line. We’d designed  a lot of those statues as “moment on the page,” as if we were people in  the Marvel Universe coming face-to-face with one of these heroes or  villains. With that in mind, we tried to provide our own detailed,  realistic interpretation of each character, rather than attempting to  reproduce a 2-D artist’s work — our Lizard bust referenced  more zoology books than actual Marvel Comics.

How did you choose the Goblin out of all of those great pieces?
DSTChuck: We’d had requests  for more villains in the Select line, and looking at what we’d done in  the statue line, one that jumped out at us was Eli Livingston’s Green  Goblin sculpt. He’s on his Goblin Glider, breaking through a cloud of  smoke, and the muscles in his face are pulled back, like he’s moving  really fast. We’d already done a Green Goblin, but that figure felt more  like an accessory to the unmasked Spider-Man he came with — it was a  Spidey figure set, not a Goblin figure. So we set about converting the  statue to toy form, adding a full range of articulation, but keeping the smoke as a support for the glider and  keeping his crazy, demonic appearance.

Something people have commented on is the two different greens on the Goblin prototype. What was the reasoning behind that?
DSTChuck: We wanted  to differentiate between the material of his armor and the material of  his mask. They’re clearly two different materials — one is rubber, the  other is scaled metal — so we made them slightly different greens. The  final product may see the greens coming closer together, but they won’t  be exactly the same green. 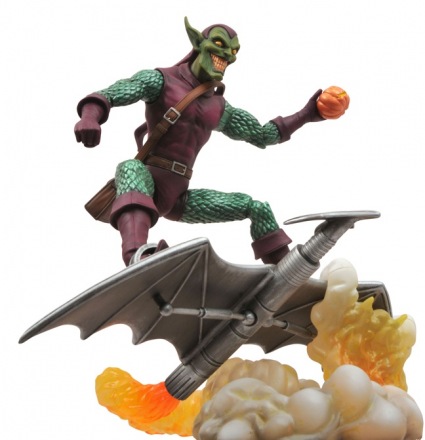