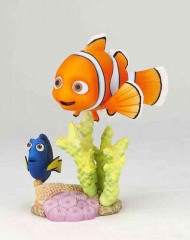 Here are some new images of Revoltech’s upcoming Pixar Figure Collection No.001 Finding Nemo Dorry and Nemo. This is probably the first Nemo and Dorry action figure I’ve seen and it’s a fantastic recreation of a Pixar classic. Nemo comes with six-points of articulated fins, removable face, mini sized Dorry and detailed corral base. Both Revoltech Nemo and Dorry are scheduled to hit in December. It will retail for about $30~ in Japan.

Details from AmiAmi
Combining the cute atmosphere of the original Pixar film with the amazing articulation of the Revoltech series this new Finding Nemo figure is set to start your collection off on a grand ocean adventure!

Based on the worldwide hit film Finding Nemo this great new figures allows you to pose Nemo in any number of great poses! Using the Revolver joints – which have been expertly hidden in the ultra-detailed sculpt – you can recreate your favorite scenes from the movie.

Nemo comes complete with a coral-style base which really brings the atmosphere of the movie into your collection! Nemo also includes a special “angry face” along with a mini-size figure of his friend Dorry!