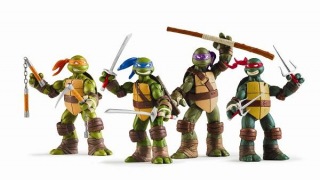 The Legend of Korra isn’t the only big cartoon coming from Nickelodeon this year. Nick is also preparing a reboot of The Teenage Mutant Ninja Turtles. Now, thanks to Playmates and MTV Geek, we’ve got a great look at the complete line-up of new toys that will be accompanying the cartoon.

The action figures will be in the 4.25″ to 4.75″ range. The designs are actually pretty close to the IDW comics designs. They also did a great job of creating truly unique sculpts for each figure. Big bonus to Nickelodeon for actually giving Michelangelo nunchucks with chains! 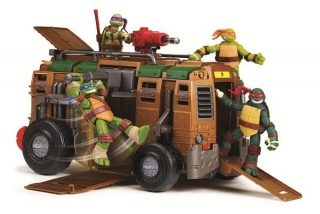 Vehicles
New vehicles from the Turtles will include an updated version of the classic Party Wagon called “The Shellraiser”! There’s also the Rippin Rider cycle and the The Ninja Stealth Bike for The Foot Clan. 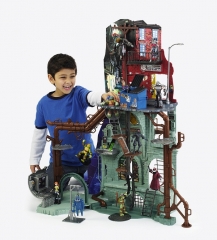 This playset is awesome! Be sure to take a good look so you can see Shredder, Kang, Splinter, the Foot Soldier, and April’s upcoming figures.

We don’t see any Casey Jones stuff yet, but this is still pretty awesome for TMNT role play!