Dreaming About Star Wars: How I Assisted In The Exor-Sith

Some girls dream about becoming a Disney Princess. I dream about fighting Darth Maul and winning. 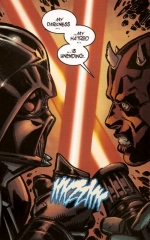 I’m not sure what planted the seed of my latest dream in my head. Whether it was all the commercials plugging the 3D experience of the Star Wars movie, watching “Dogs 101” and seeing the breed behind the inspiration for Chewbacca as well as how Indiana Jones got his first name….or maybe it was my friend Nelson’s pancakes shaped like Star Wars ships. I’ll never know if it was a media blitz or Nelson’s pancakes that’s responsible for why I dreamed what I did, without further ado, my dream.

** on a side note, I was stumped on how to describe the process of turning Sith into non-Sith. If a Jedi being turned is known as “going to the dark side”, what’s the opposite known as? I’m not as familiar with Star Wars lore as my friends so I turned to them on Facebook. I soon learned that it’s called “redemption” but my friend Dan’s term was the best and the one I ended up using – Re-Skywalkered. **

I’m not sure what I was. I think the closest way to describe me would be the Guardian Of Neutrality. It didn’t matter to me if the soul wanted to be good or bad, if they wanted to walk on the side embracing light or if they found what they needed on the dark side. I am the guardian of that very fine line that separates the two.

My only goal is to ensure safe passage of the soul as it fully transitions itself into whatever side it chooses. That is the reason for my existence.

I have no idea what my body looked like. I only know that I could fly. I guess this means I had wings! For some reason, I kept thinking my wings looked like Kowl’s from “She Ra” but with shades of black, grey and sinister red mixed in. Gotta keep it balanced, you know? Yin and Yang and all that.

The first thing I remember is shadowing this Sith around. He looked kind of like Darth Maul but with more black than red on his face and he had these crazy, curled horns on his head. I was drawn to him because he seemed like he was fighting a very intense internal battle with himself. There was a lot of stalking around this insane dead black tree on top of a craggy hill side and he was muttering under his breath. I couldn’t hear what he was saying but it didn’t matter because I was more interested in his inner turmoil. I could see it as colors.

These two colors swirled all around him and were battling it out. At times, it looked like the Black whirls were going to swallow the White whorls but the White bits would always make a come back. After what felt like forever and an instant, both colors faded out. The Sith stopped pacing and, for the first time, saw me.

I guess they could only see me when a decision has been made. He told me he understood the concept of Mercy, liked it but knew that meant he needed to go to the other side of the Force. He then asked for my help for safe passage. I said “Okay” and off we went. 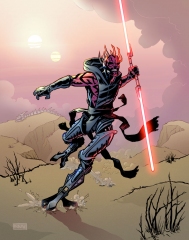 But we were soon pursued by Darth Maul!!! He was not happy (but he never looks happy. Maybe that’s a draw back of being on the Dark Side. You’re never allowed to smile, only smirk). He started hounding my charge!

That made me mad because I’m supposed to ensure this soul’s safety to where it decided to go! How dare you f*** with my duties!!!

Enraged (yes, a Guardian of Neutrality is allowed to get mad because we can be happy too) and scared the soul might die, all the elements of nature leapt to our aid. The first element that helped was Water. We were flying over this crazy ocean with GIGANTIC sea creatures the likes of which I have never seen on Earth and a tsumani immediately started battering Darth Maul.

While he found a way to battle water, a tunnel opened up in the sea. Without thinking, I charged into it with my charge. We found ourselves flying through a dark cavern of sorts under the sea and thought we were safe….but we weren’t! What a persistant motherf*****!

Flying around with stalactites and stalagmites proved to be a daunting task (face planting into one of those while going full force is not recommended even while in a dream) and slowed us down considerably. This gave Darth Maul a chance to catch up to my poor Not-So-Sith.

An epic battle ensued and we escaped through elemental tunnel after tunnel. Just as we reached the last one (it was rainbow colored), Darth Maul managed to knock the light saber out of the hands of my Not-So-Sith. Sure that I would lost my charge, I grabbed him and heaved him ahead of me towards the light just as Darth Maul managed to grab on to his ankle….

…and then I woke up.

Special thanks to all my geek friends on FB! (Nelson, Dan, Ed – I’m looking at you).

Bonnie N. Clyde is a writer for YouBentMyWookie.com and the alias of the Supreme Commander / Ultimate Destroyer. When she isn’t engaged in lightsaber duels with Darth Maul, she writes in her blog over at MissBonnified.com