My TV Diet Is Classy

I’ve realized my taste in TV has changed. I don’t know if it’s due to being married or if somehow Tahiti managed to put a spell on me and what I like on the boob tube but I’ve noticed a few things…

Now that I’m back from the honeymoon (details on that later), I’ve realized my taste in TV has changed. I don’t know if it’s due to being married or if somehow Tahiti managed to put a spell on me and what I like on the boob tube but I’ve noticed a few things.

I used to like watching crime shows like “Law and Order SVU”, “Bones”, “CSI : All Of Them”, “Harry’s Law” and the like. Don’t get me wrong. I still like them. I just noticed that I watch them LESS.

Here’s what I watch now and why. 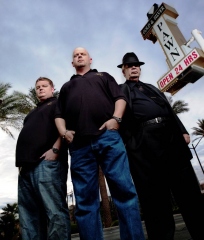 This is the show that kicked off the mutation in how I watch TV.

I love this show. I need a shirt that says “I love you, Chumlee, but not as much as I love Clyde”. I love The Old Man. He’s the crankiest sonovabeetch I’ve ever laid eyes on but I know how to get to him. Chicken wings and weird toys from the 50’s.

I love this show so much, I tried to talk Clyde into taking me to their pawn shop during Part Two of our honeymoon. I got shot down. I was sad but still enjoyed the Vegas leg of our honeymoon. I think it was because Clyde wasn’t a real fan, like myself, at that point. This show has since won him over and he’s now just as obsessed as I am.

Here’s why I like the show :
– I learn something new every day. I now have a strangely extensive knowledge of old guns.
– I learned a lot about business.
– I learned to always get things checked out by an expert before laying down money for something I’m not sure about.
– Bargaining is a fine art form. From watching this show, I have now honed my bargaining skills

Once George Stephanopoulos made an appearance and bought a first edition book, I managed to convince Clyde to go with me the next time we go to Vegas.

I’m hoping for sometime in the next few months. :D 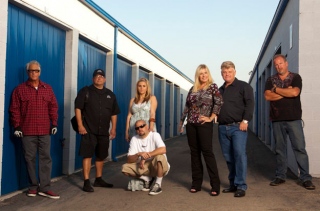 I started watching this after I devoured all the episodes of “Pawn Stars” from Netflix, aka my new boob tube best friend. At first, I didn’t like this show because I could not, for the life of me, understand what the hell Dan the auctioneer was saying as he was doing his auctioneering thing. I almost gave up on this show halfway through the first episode but I stuck with it. And now I can say I can understand what Dan’s saying when he’s doing his thang.

Here’s why I like it :
– It’s like a modern day treasure hunt! The things these guys find hidden away in boxes!!
– I love to see how much all the stuff they bought is worth.
– I like Dan and Laura. She’s awesome.
– Barry is the BOMB!!! Everyone else….eh.

I am now impatiently waiting for Netflix to get Season Two. Clyde does not like this show as much as I do. I have since informed my new husband that I want to go to storage auctions to buy lockers and then I’m going to open a thrift shop.

This is a Bravo show. I don’t usually watch Bravo because I do not like the Real Housewives of any city. They’re just weird. But THIS show! Pure awesome.

Here’s why I like it :
– I love real estate.
– I love expensive real estate. I don’t care if I can’t afford it right now. Let me daydream, dammit.
– I love watching people bargain.
– I love watching the way money is made, how much it costs and how it changes ownership.
– I ADORE Frederick!!! He’s beyond fabulous. I almost spelled that “F-A-B-O-L-O-U-S”….like the rapper…Heaven help me….
– Michael is kind of like an underdog. You know how I love underdogs.

I have since informed Clyde that if we were to ever be in the position to buy mind blowing expensive real estate in Manhattan, we are going to call Frederick. I have a feeling I will have an awesome time with him as our broker.

I wondered why there was only 1 star for this show. If it sucked so bad, why are there at least 3 seasons on Netflix? The mystery stumped me and so I jumped down the rabbit hole….only to find myself in the craziest world ever.

I do not and can not, for the life of me, understand why people do this to their kids. Yeah, okay, so I can see the argument for improving self esteem (like in the case of adorable little Miranda Soong who suffers from alopecia) but I also see why it’s like watching a horrific train wreck in slow motion.

There are some sweet little girls who appear well adjusted, poised and very normal. They take losing with grace and are happy just to be able to compete. And then there are the crazy, spoiled, bratty girls….and I see a great deal more of these kinds of girls. They throw tantrums and treat their parents disrespectfully from what little I’ve seen and know of them based upon the show.

Here’s what I think :
– Why would you think it’s a good idea to SPRAY TAN your toddler?
– Or cake on the makeup and turn their faces into a weird child-adult-club-skank hybrid? I love make up as much as the next girl….but on a TODDLER? Why not just let the baby be a baby? What’s wrong with that?
– I can’t believe some of these families seriously spend TENS of THOUSANDS of dollars a YEAR for these pageants. And for what? To get a cheap, rhinestone CROWN?! Some of what these families have poured into the multi-billion dollar pageant industry for in the span of a few years is the more than what my wedding cost.
– Some of those Full Mega Glitz dresses for the toddlers (I’m sad I even know that term) go for thousands of dollars. Thousands. Yes, as in the plural form of “thousand”. That means one of their itty bitty dresses cost more than what I paid for my WEDDING DRESS. What the fuck?!

There was this one episode in which the mom concluded it by saying something to the extent of “I’m disappointed that my daughter didn’t even place. We’re going to work hard so that she can place at least a Queen. Once she does that. then we’ll focus on school”.

I now know why our nation is getting dumber and dumber.

What tripped me out was how dead serious she was. If I had a little girl and she wanted to compete in pageants, I would tell her she can compete….after she brings home a full year of straight A’s and then I’ll think about it.

Now, if you’ll excuse me, I have another episode of “Pawn Stars” to attend to.

Bonnie N. Clyde is a writer for YouBentMyWookie.com and the alias of the Supreme Commander / Ultimate Destroyer. When she isn’t digging through storage bins, she writes in her blog over at MissBonnified.com