My friends think I’m a little weird. I say “weird” is relative so HAH!! But seriously. They can’t understand my fascination with things that go bump in the night. 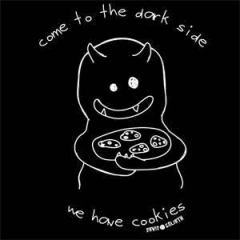 One of my favorite stores to shop in is David And Goliath’s Stupid Factory. I am especially in love with their little demon. One of my favorite shirts features this little smiling demon holding a plateful of cookies with the greeting “Come To The Dark Side. We have Cookies” underneath. I not only own the shirt, but I have the messenger bag AND the pajama set. Did I mention it glows in the dark??!! OMFG, FTW!!! I <3 it. My friends (....and family too, come to think of it...) think I'm a little weird. I say "weird" is relative so HAH!! But seriously. They can't understand my fascination with things that go bump in the night. I tell them it's because I'm a Scorpio. You know how Jessica Rabbit isn't bad because she's just drawn that way? Yeah, well, I can't help it either because the my day of birth AND my year of birth makes me a Scorpio x 2. I'm like double the pleasure and double the funnery, baby. w000t!! I've been trending the intrigue regarding things I've always loved and here's an updated list from a previous post I had talked about. Suck My Blood

First there were vampires. I still have a soft spot in my heart for them since one of the first dreams I can ever remember having (I was 5 or 6 years old) featured a vampire. There’s just something so incredibly hot in the way they brood and embody the term my girlfriend and I came up with one day to describe our state of mind. That word would be “emo.funkdafied”.

Granted, I probably wouldn’t be thrilled if my boyfriend ever looks at me with hunger in his eyes because he considers me a food source instead of his love muffin. Wait, muffins are edible. Crap.

I love dogs as much as any other animal lover does but I’m not sure about my man turning into a giant version that’s completely out of control every time there’s a full moon. I don’t care about the “magic” that comes with wolves regardless of what The Mountain Three Wolf Moon testimonials say. 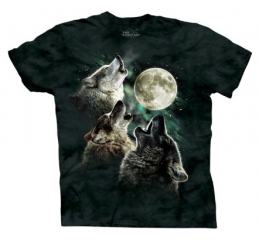 Think of all the vacuuming I’d have to do every month when he sheds!!! Ugh. It’s already an ordeal when I battle the existing amount hair on the floor thanks to my epic, shining, glorious mane. I’ve broken enough vacuums with my final attack, Flying Tiger Hidden Hair Ball, in my life to ensure Hoover will never go out of business but add in a werewolf boyfriend? Forget about it.

Besides. How am I supposed to explain to people when I show up to work / functions / anywhere outside of my house with bite marks and killer scratches? It’s bad enough my friends think I could moonlight as a Mistress thwacking the rear ends of random guys with gigantic paddles but this would really put things over the edge. No, thanks. :D

Till Death Do Us Part… Just Kidding

Zombies are another thing that’s really popular right now. I already discussed in great depth why I don’t like zombies but I’ll break it down a little bit more.

I’m a nurse by day. In my specialty, I basically zombify my patients on a daily basis because I have to change their dressings every day.

I don’t need to deal with this when I’m at home because my undead of a boyfriend can’t keep it together. Not. Sexy.

But you know what else I’ve always loved besides vampires? FALLEN ANGELS!!! Half Demons!!! w0000t!!!!

I’m not sure what it is exactly that does it for me. I’ve always been drawn towards the dark side so fallen angels and the such are right up my alley. They remind me of the bad boy trying to be good but in their case, they were the good guys who then went all Dark Side and now want to redeem themselves. The Half Demons are locked in an stupendous internal battle between their demonic side and their valiant human half. Wow. * drool *

Maybe this explains why some of my favorite songs are Danzig’s “Under Her Black Wings”, Massive Attack’s “Angel” and Deftones’s “Change”. I balance this out with love for Asian pop and a super secret love for sappy love songs like 98 Degrees’s “Heaven’s Missing An Angel”. I’m all about being well-rounded, people. 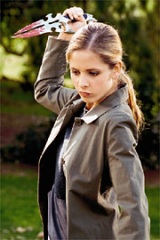 God, David Boreanaz was absolutely delicious but wtf happened to him when he got his own spinoff? That was just too cotton candy for me, man. Angel was so much hotter when he was all angst and brooding. * drool *

Honorable mention goes to Spike because he’s crazy, he’s funny, he doesn’t give a flying *bleep* and he has a killer accent. Get it? Killer? Undead? I crack myself up.

Yes, I used to watch Charmed. I watched it for Cole. I loved him. There’s something so tragic about his relationship with Phoebe. Oh, the drama! Theirs was a love that could not be thanks to him being 1/2 demon and stuff but how he tried to make things work for her! Omg…talk about total tragic love….I eat that stuff up like a starved kitten in a sushi buffet.

On the current “Bonnie Wants Needs To Read And Watch”? Lauren Kate’s “Fallen”, Paul Bettany in “Legion” (OMFG, I CAN’T WAIT FOR THIS TO COME OUT!!!), Becca Fitzpatrick’s “Hush Hush”.

Bonnie N. Clyde is a writer for YouBentMyWookie.com and the alias of the Supreme Commander / Ultimate Destroyer. She often writes in her blog over at MissBonnified.com and day dreams about being in a love triangle between a sexy vampire and a hunky fallen angel.