What is dead may never die. Kinda like my love for this show and how I hope my love still remains by the end of the final episode tonight…

What is dead may never die. Kinda like my love for this show and how I hope my love still remains by the end of the final episode tonight because WHEW. Season 8 is feeling kinda sloppy to me so far. They had TWO YEARS to get this shit right and they not only mauled a bunch of complex characters’ story arcs and character development but they somehow forgot to take a Starbucks coffee cup out of a scene and they let Jamie’s severed hand magically grow back for a few second so he could hold his sister-lover one last time.

But I’m gonna let it slide because I’ve been watching this show with my husband for as long as we’ve been together. We started dating the first season. We got married the next. Went through 2 pregnancies and a few miscarriages. GoT was there for us and I am so sad to see it come to an end.

Naturally, I’ve got some thoughts and some bones to pick as well as what my guesses are for the final episode.

Let’s start with how I feel about some of my fave characters and how they ended survived the last 8 seasons. I’m gonna focus on who’s still alive to keep this short-ish.

First up, Sansa. She went from stupid, vapid, knight obsessed half wit to someone I pitied and now she’s someone I admire for her strength, wit, cunning, ruthlessness and her love for her people. She’s fam and she knows better than anyone how to play the game of thrones.

And then there’s Arya. Did I think the little girl who loved bows and arrows would eventually kill the Night King? I did not see that coming! 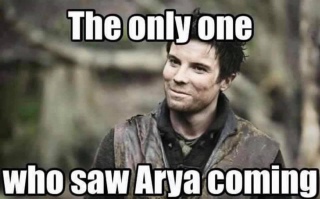 Too soon? Still too awkward? HELL, YES. But for reals, though. 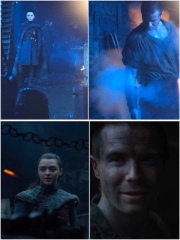 Let’s talk about that REAL weapon Arya wanted from Gendry tho. A girl wants to know what that hammer really does. :P

Bran. Bran is weird AF. I don’t know WTF purpose he’s served for all of season 8 besides drawing out the Night King so that Arya could kill his cold ass. Okay, so that’s pretty important. Never mind. Bran can stay. LOL

Brienne went from steelier than Valyrian steel to weepy maiden in, like, one episode. I personally think she deserves better than Jamie to give her v-card to. I MEAN, HELLO!!! TORMUND LOVES YOU!! Okay, yeah, sure, Jamie knighted her and everything but this isn’t like some kind of vampire coven where you’re bound to your maker and have to serve up your virginity to him on an awkward silver platter…or golden hand, whatever. 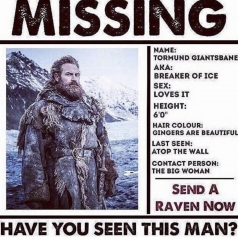 Grey Worm. ….I just can’t. My heart breaks for you.

Tyrion seriously went from one of the smartest guys in the show to one of the dumbest. How TF does he not see that Dany was slowly becoming nuttier than chunky peanut butter? His love for her seriously is messing with the best thing about him – his brain. Is it because he stopped chasing the ladies with his penis? Was that the source of his near magical ability to think himself out of various situations that would’ve seen a lesser person die?

And how is it that he hasn’t figured out he’s part Targaryen when the dragons didn’t fry him up when he went into the dungeons to set them free? This guy knows probably everything there is to know about them and he didn’t AT LEAST ONCE stop to think about that? Not even for a second? I guess he might’ve been too busy trying to not die by dragon fire at the moment. Okay, Tyrion. I’ll give you that but why did he not think about it SOME MORE? Hmmmmm??

Jon Snow. Oh, deliciously broody and not too smart but oh, so honorable Jon Snow. You really know nothing and you’re dumber than a sack of potatoes but you’re so cute and earnest and always trying to do the right thing, kinda like Ned Stark…and look where that got him. Dead. I mean, shit, JON WAS STABBED AND KILLED ONCE ALREADY BY HIS BROTHERS OF THE NIGHT’S WATCH! Let’s not tempt fate again a second time especially since The Red Woman is dead, ’mmkay?

Daenerys. First of her name. Khaleesi. Mother of Dragons. Breaker of Chains. Roaster and Toaster of Innocents. Yeah, that was not one of her finest moments. You know, I can get behind her becoming the Mad Queen. It’s been hinted at for a long time and that kind of incest-bred madness has got to be hard to dodge forever. My issue is simple. Why does she have to go from Most Awesome Badass In All The 7 Kingdoms to literally the Crazy Ex-Girlfriend (who’s also your aunt) And Who Is Setting Fire To Your Stuff? Like, literally. She snaps after Jon Snow refuses to love her romantically. C’mon, man.

My thoughts of random deaths in Season 8 so far.

Part of me is kind of glad Cersei was squished like a grape but part of me isn’t. It was too literal. She died literally as her entire world crumpled around her. Here’s how I thought she was gonna die watching S8E5 :

1. Arya was wearing Jamie / Qyburn / The Mountain’s face as she skewers her with needle. Bonus points if it was Jamie or Tyrion because of the Valonqar prophesy.

2. Qyburn was gonna poison her crazy ass or wildfire her to death when she wouldn’t leave the Red Keep.

3. The Mountain squashes her accidentally trying to get to The Hound.

4. GHOST somehow kills her in the last episode because he’s also a “little brother” as the runt of the litter.

5. Jamie kills her when he sees her.

6. Jamie kills her when he realizes they’re trapped.

7. Jamie kills her when he pulls her in for a hug.

8. Jamie kills her after stroking her hair.

9. Euron somehow doesn’t die from his wounds and kills her when he sees her with Jamie. I mean, Jamie didn’t die of two possibly punctured lungs and massive internal bleeding, somehow magically regrew his hand and managed to drag himself all the way down into the bowels of the Red Keep.

Death by rocks? Didn’t see that coming. Kinda like the whole Arya thing. It was a very unsatisfactory death for one of the characters I loved to hate the most but I guess I’m kinda glad she died in the arms of the one she loved the most.

Jamie shouldn’t have died. He should’ve stayed with Brienne. You stupid fool.

Missandei…it’s too soon. We didn’t deserve you. Sweet, sweet Missandei. I miss you. I wish you and Grey Worm could’ve enjoyed a lifetime of endless walks on the beaches of Naath together. Geros ilas.

Varys also was someone I was sad to see die. He wasn’t my favorite person but he did what he did all for his love for his people.

Lady Mormont…fiercest little one ever. Even scarier when she came back for a hot second as a wight.

And now what I think might happen in the last episode.

It’s a toss up between who will kill Dany. The odds favor Jon and Arya but what if it’s Tyrion?

He can touch dragons. He’s gotta be part Targaryen.

If he kills Dany and Jon refuses the throne, Tyrion may have the next best claim to the throne. He’s the King and he now has Drogon. I bet he’s the 4th dragon’s head in the new credits.

Regardless of who kills Dany, Tyrion has my bet on who ultimately sits on the Iron Throne.

Tyrion, as the new King, marries Sansa again. They make the most sense. He’s the last of The Lannisters, he’s also a Targaryen and she’s a Stark.

Since King’s Landing and the Red Keep are pretty much a smoking ruined mess, my bet is that they move the seat of power to Winterfell.

Brienne is the new captain of the King’s Guard. I am still hopeful Tormund comes back for her, goddammit.

Arya marries Gendry because they’re just so cute and I keep hearing Robert Baratheon felling Ned Stark about how he has a son and Ned has a daughter. She also becomes the new Lord Of Whispers. I mean, who better to infiltrate and learn secrets than someone with the very unique skill of swapping faces plus being super good at killing people? Just saying.

Jon takes Ghost, the goodest good boy in the entire known world and beyond, back to what’s left of the Wall. He helps to rebuild it before going Beyond The Wall.

Bran becomes…I dunno. A tree. Maybe the heart tree in Winterfell. Your guess is as good as mine.

Samwell is Grand Maester of the Seven Kingdoms.

Grey Worm…to be honest, I see him making his way to Naath. I don’t see him staying on in any way if Dany is dead, imprisoned or otherwise removed from power.

What do you think will happen?

Bonnie N. Clyde is a writer for YouBentMyWookie.com and the alias of the Supreme Commander / Ultimate Destroyer. When she isn’t training dragons, she writes in her blog over at MissBonnified.com