Parental Epic Fail: The Not So Awesome Saga Of The Balloon Not-Fallout Boy

You know that saying “Be careful what you wish for?” It would appear that the Heenes either wanted fame or attention, and guess what? They got it. I hope they’re happy. 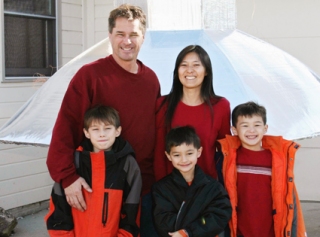 Remember that really old school song from DJ Jazzy Jeff and The Fresh Prince? The one that goes “Parents just don’t understand?” That’s the first thing I thought of when I first heard of the whole Balloon Boy incident. What exactly was it that these parents didn’t understand? Simple. How to raise children.

When I first read this story on the Los Angeles Times website, nothing about it made sense to me. I’m no mad scientist but I didn’t see how a homemade contraption made of cardboard, shiny material and rope of that size could carry a 6 year old boy. I could be wrong because:

1. These people are storm chasers. They may only be amateurs but hey, that’s more than I know. I’m the person who can barely get a friggin’ kite to take off. Granted, I know diddly squat about hot air balloons or equipment designed to chase storms but here’s what I do know. Something tells me I don’t think they’re built to accommodate little human beings, especially little BOY human beings described as being hyperactive.

2. For all I know, this stuff could be top secret NASA-grade material and not your run-of-the-mill items you can pick up at Home Depot….but something tells me this isn’t the case.

I don’t know about you but most 6 year old boys I’ve had the pleasure of babysitting don’t exactly sit still. They are like boy-shaped mini torpedoes of constant frenetic energy that only stops, hopefully and Heaven willing, when you’re feeding them, when they’re taking a potty break or when they’ve passed out from trying to wear you out. Having said that, if at any point, little Falcon lost his cool and spazzed out to the N-th degree during the balloon ride from Hell, I thought the whole device would’ve fallen apart.

Cardboard and silvery mylar contraption versus 6 year old boy throwing a Code Red Epic Freak Out. This is a no brainer on who the winner of this stupendous match up should be.

I am not completely without feeling. On the off chance my spidey senses were wrong, I hoped that he would be recovered safely…and receive lots and lots of therapy after his ordeal.

Then again, he’s 6. There could be a chance he wasn’t scared at all and thought he was on some kind of crazy adventure while screaming the lyrics to “A Whole New World.” Who knows?

So, surprise surprise, it all turned out to be a hoax. That got me thinking of a few things. 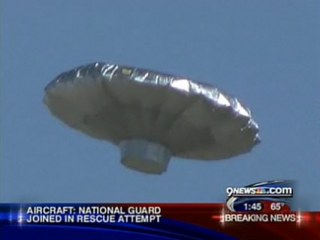 These parents think they’re direct descendants of aliens. Dude, they got it all wrong. According to my utterly unconfirmed and entirely whimsical genius theory of human evolution, we’re the PREDESESSORS of aliens. Duh. Had they read YouBentMyWookie, they would’ve known that and maybe had an “Ah Hah! Maybe this is a super bad idea omfg what were we thinking oh wait that’s right we weren’t we’re so happy we ditched that Epic Fail crackpot idea” moment. Tsk tsk.

Actually, regardless if they read it or not, warning signs should’ve gone off in at least one of their heads. “Proceed with caution” isn’t what I would’ve imagined. “Stop” is more like it.

From what I understand, the Heenes have been on “Wife Swap” twice. I can understand the novelty of being on it once. It’s human nature to wonder if the other side really is greener and to see what it might be like to live another person’s life. This explains all the crap I see on TV aka Reality TV because we all knoooow that’s true reality. The term “reality TV” should be listed in the Webster’s Dictionary under the word “oxymoron.”

But I digress. So I can understand going on that show once but two times? That kind of waves a big flag with the words “Attention Whore” complete with crazy clowns frolicking around them. Why would you submit your family to a complete stranger who’s trying to pretend to be your mom/wife with all the accompanying production crews and national scrutiny TWICE? I would think once is more than enough.

You know who this reminds me of and who I dislike just as much? The OctoMom and the played out drama (*yawn*) known as Jon and Kate Gosse-whatever.

Children are wonderful gifts. They’re the representation of our future and we, the adults and people who brought them into this world, are supposed to be their guardians. We’re supposed to watch over them, protect them and hopefully get to see them grow into healthy and happy adults. They’re not cash cows to be exploited by greedy, money seeking, attention craving freaks who want to be stars in their very own reality TV show.

If people want to make a show out of their family, here’s an idea. Join a circus or start your own but please don’t subject the world to your family’s issues. Extra shame-on-you’s for messing with people’s emotions, their flight status AND making the heroes of law enforcement and the Air National Guard unwilling and unknowing pawns in your bid for your 15 minutes of fame.

You know that saying “Be careful what you wish for?” It would appear that this family either wanted the fame and/or attention and guess what? They got it. I hope they’re happy.

Bonnie N. Clyde is a writer for YouBentMyWookie.com and the alias of the Supreme Commander / Ultimate Destroyer. When she’s not screaming at children telling them to get off her lawn, she writes in her blog over at MissBonnified.com.

One thought on “Parental Epic Fail: The Not So Awesome Saga Of The Balloon Not-Fallout Boy”