I’m Back! Time Flies When You’re Having Fun… or Planning A Wedding

I have a lot to be thankful for this year and I can add “getting married to my hunky geek” to that list! 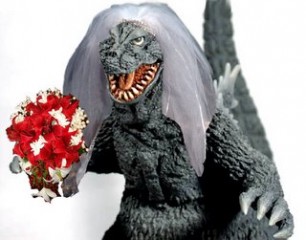 I have been MIA. Time really flies when you’re having fun….or planning a wedding. It’s a strange kind of fun that’s full of moments where I feel like I’m on a rollercoaster ride because my stomach dropped down to visit my toes. Then there are the quiet moments when Clyde and I start fantasizing about eloping because this wedding planning thing has taken on a mind of its own. These brief periods don’t last long because we think about how much money we’ve spent and all the contracts we’ve signed.

So what have I learned so far?

I’m Still Bonnie From The Block

I’m happy to say I’m not Bridezilla. The only time I started to mighty morph into the dreaded BONNIE SMASH was when that piece of @#$% venue in Temecula, CA told me that I don’t have enough money to get married. [OMG real life Pretty Woman! – ED]

Bitch, please. Your POS venue is not all that. It’s one thing if The Most Awesomest Of Awesome Wedding Venues In The Entire World told me I can’t afford their services. I could understand that. But for some rinky dink place in TEMECULA??!!

I thought about putting them on blast on every wedding forum known to man but decided to put my energy to better use. So I wrote a very succinct email to the owner, penned a very thorough review on Yelp, blasted them on my blog and then got on with my life.

They say revenge is sweet. I say revenge is living well. In my case, I can give that venue a double birdy because I’m getting married in a 4 Diamond resort. SUCK ON THAT!!!

Jenny Craig Got Nothing On Me

So I’m wearing a Chinese Qi Pao for the wedding. In case you don’t know what a Qi Pao is, it’s the Mandarin Chinese pronunciation of the dress Chun Li from Street Fighter II wears. The only differences are:

– I won’t be wearing spiked bracelets (I have to leave mine at home. They don’t exactly scream “WEDDING”)
– My dress isn’t blue. It’s red. That’s because Chinese people are obsessed with red as it is an auspicious color.
– My hair won’t be tied up in awesome buns. 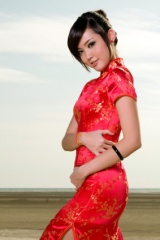 No, this is not me. This isn’t the exact design of my dress either. That’s right. My dress is CUSTOM MADE, BAYBEE!

The reason why I titled this section with Jenny Craig in the title is because I’m on the Wedding Diet. That means I have cut out all fried foods, pizza, burgers, carbs and refined sugars. Basically, I’m miserable. I can’t remember the last time I had pizza. The reason why I’m doing all this to myself? Partly because I want to be healthy. The primary reason, however, is because….I’m vain.

I want to look BEYOND AWESOME on my wedding day!! That way, if I ever have kids, I can point to these pictures and say “Mommy was H.A.W.T. back in the day….before you rugrats came along and killed my Coke bottle figure”.

The best motivation I’ve had was when I got measured for the Qipao. The lady making it took my measurements, confirmed that I will be exercising (btw, Yoga is no joke, man! Holy mother of all that is merciful…) and announced that she will me making my dress on the small side as incentive for me to shrink.

Long story short – I fit into the dress, the zipper didn’t have to be wrestled up or down and I can walk. Breathing, however, is another story. Good thing I have about another week to go before the wedding. Worst case scenario, I wear Spanx. Win!!!

I gave some serious thought into wearing a kimono also (I’m Chinese-Japanese) but decided against it.

Being that Clyde and I are paying for our wedding ourselves, we’ve become masters at entertaining ourselves on a small budget. One of our favorite things to do is to watch “Thundercats” and “The Walking Dead” at home.

We love “Thundercats” because we both grew up watching it in the 80’s. Watching it together now is both enjoyable because we get to sort of relive our childhood….but, at the same time, it makes us feel old. *sigh*

We LOOOVE “The Walking Dead” because it is AWESOME!!! AND I HATE ZOMBIES!!! To be honest, I thought Season One was a lot better. Season Two – The First Half just kind of dragged on and on. I felt like the only time anything really happened was at the end of each episode.

But, man…..the ending on Sunday’s episode??! CRAZY!!! But I knew it would happen the way it did.

On that note, that will be the last episode of “The Walking Dead” that I will watch as a single, unmarried woman.

This year’s Thanksgiving was the last holiday I celebrated as a single, unmarried woman.

I gotta say… I have a lot to be thankful for this year and I can add “getting married to my hunky geek” to that list. I also can’t wait to watch our engagement video. Instead of doing the usual “walk on the beach – stare lovingly into each other’s eyes” and stuff, we decided to do it in the style of “The Office”. My model cousin turned himself into Mr. Chow in it. It’s going to be epic.

Now to figure out a way to incorporate my favorite line from Yoda into my wedding vows….

Bonnie N. Clyde is a writer for YouBentMyWookie.com and the alias of the Supreme Commander / Ultimate Destroyer. When she preparing planning her wedding and getting into street fights in her Qipao, she writes in her blog over at MissBonnified.com