Yesterday was the Victoria’s Secret Fashion Show. I, personally, think it should be renamed to “Boobies and Booties” but I don’t think people would go for that. Whatever. 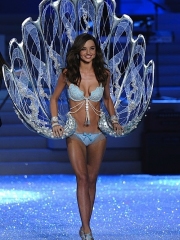 Yesterday was the Victoria’s Secret Fashion Show. I, personally, think it should be renamed to “Boobies and Booties” but I don’t think people would go for that. Whatever.

A very real conversation in my house yesterday with Clyde went like this :

Me – DON’T CHANGE THE CHANNEL!! THE VICTORIA’S SECRET FASHION SHOW IS ABOUT TO COME ON AND I’VE BEEN WAITING FOR IT ALL DAY!!

Clyde – ….okkkaaaayyy…. I think I’m the only guy who’s fiance is more excited about it than I am. I don’t even think it’s all that. You just like it because of the huge wings the girls wear, huh?

This is my favorite fashion show. This is the only kind of fashion I like. Maybe it’s because I don’t get haute couture. Perhaps it’s because I’m not a fashionista. I like to wear what I like to wear and that’s that. I’m clean, my clothes are pretty and neat. So why the fascination with lingerie? I think it was something my mom said to me when I was just a little girl and I’ve never forgotten.

Bonnie, wearing good shoes is important! You buy discount clothing or have bags that are not brand name but, listen to Mommy, and remember to never Ever EVER buy cheap shoes! Oh, and make sure your underwear matches and that you don’t have holes in them.”

So here’s what I thought of this year’s show.

Is it just me or do the girls look barely old enough to be wearing bras? They also look WAY too skinny. Anybody remember the original Victoria’s Secret Angels? Helena Christensen, Tyra Banks and Stephanie Seymour? I loved them because they were curvy, they were built like WOMEN and they oozed sex appeal.

A lot of the current Angels and models look like they haven’t eaten in years.

I just don’t think it’s sexy when I can count your ribs when you inhale.

Ditto to being able to count all the vertebrae that stick out of your back.

They also look like they ditched junior high to scamper up and down the runway. Case in point, the entire PINK segment of the show.

Adriana Lima is one of my favorite Angels of all time. I love her look and her style. Look up the word “sultry” in any dictionary and she should be the only definition you need. I also can’t believe she has KIDS. She is my inspiration whenever I’m busting a mean sweat on the yoga mat and wondering why the @#$* I wanted to do yoga and/or Pilates in the first place.

My current favorite? Miranda Kerr. She’s very chill and humble. She’s also Buddhist (* high five * the fellow Buddhist). Plus, I think she’s GORGEOUS. I also wonder if she ever makes hubby, Orlando Bloom, wear the Legolas ears and wig. I would. Something about those pointy ears…. I also melted a little bit each time I saw him stand up and clap whenever his wife was strutting her stuff down the runway.

Did you guys see the part where Adam Levine kissed his gf during his perfomance of “Moves Like Jagger”? I thought that was soooo sweet. They’re such a cute couple. 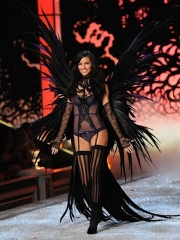 Yes, my favorite part is are the WINGS!!! Clyde was like “If you could, you would totally wear one of the Victoria Secret wings for Halloween, wouldn’t you?” I was like “HELL YEAH, I WOULD!!! And then I would spend the majority of the night screeching ‘MOVE, BITCH!! GET OUT THE WAY!! GET OUT THE WAY!!!’ as I waded through crowds of people”. He just shook his head.

Ladies – wouldn’t it be a small dream come true if you woke up one day with a body to kill and these GLORIOUS wings strapped to your back and you get to parade around on a glittery runway while wearing only your underwear, rhinestones and a KILLER PAIR OF SHOES???!!! ….no? Okay, so fine. Maybe we don’t have the same little daydream.

Fellas – tell me your heart wouldn’t beat just a little funny if you saw your woman strutting down a runway heading right for you with a pair of epic wings flared out behind her? Did I mention that she’s wearing a bra, a pair of panties and a few scraps of cloth artfully draped over her?

Favorite Looks Of The Night

Miranda Kerr in that drop dead gorgeous Fantasy Bra. I can’t imagine what it feels like to wear something worth millions but she made it look like a walk in the park.

My absolute, hands-down favorite was when Adriana Lima burst out on the runway wearing that black feathered outfit and strutting like she was the Queen of the Damned. Holy sh**….I wanted those wings so bad. Clyde looked up from his laptop, saw her on TV and said “Hmm…..you would like that one best. It’s so you.”

Can’t wait for next year’s show, also known as “Bonnie’s Motivation To Continue To Sweat During Yoga/Pilates And Not Making Pizza Her Fifth Food Group”. :D