During the “Burn Notice” press rounds at SDCC, we had the chance to sit and talk with Bruce ‘The Man’ Campbell himself!

I had the chance to sit down at a press roundtable and talk with Bruce ‘fuckin’ Campbell! It was pretty exciting to be honest since I’ve been a fan for a long time. At the ‘Burn Notice’ panel Bruce had told everyone all he knew about the “Evil Dead” remake was that he may play an old man at the end of the film. That could be cool and any news on the remake you will find here.

Bruce stepped out in a while suit jacket, pink button down shirt, and turquoise pants. He wore that outfit like he was born in it. I’m honestly not sure if that was him promoting ‘Burn Notice: The Fall of Sam Axe’ DVD or if it was just Campbell on a Thursday after noon. Below is the video of our roundtable interview with “The Chin.” 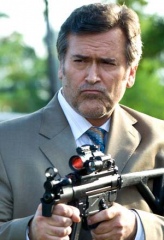 Okay, so this was my first press roundtable EVER and I thought it went alright. I’ve been following “Bruce Campbell VS Frankenstein” and truly hoped there was some better news on it. Bruce was pretty cool in person and honestly I was kind of nervous since in my skull my brain meat was screaming “whole fuck shit damn rot! We are talking to ASH!!!! Don’t shit your pants and cry you jerkoff!” As you can see my brain sort of hates me. Anyway, Bruce was rad and this was a really cool experience I only wish I could have asked something so great that Bruce would have said “My good man you will be having beers with me later!” That didn’t that happen at all and I think I stumbled pretty bad on my second question.