The teaser poster for Peter Berg’s Battleship has been leaked and the official site, BattleshipMovie.com, has also been launched.

The teaser poster for Peter Berg’s Battleship, (Yes, based on the Hasbro board game) has been leaked and the official site, BattleshipMovie.com, has also been launched.

The teaser poster doesn’t show much, but a big old battle ship with the logo. There isn’t much on the official movie site either, but there is a giant countdown so one can assume that something cool will be revealed soon.

Here’s the official film synopsis:
A story of an international Navy fleet engaged in a very dynamic and intense battle against an alien race is known as “The Regents”. The aliens come to planet Earth, on a mission to build a power source in the ocean. Upon their visit, they come in contact with a navy fleet. The film is also purported to show both sides of the story, from the aliens’ perspective, as well as the humans.

From the sound of it, it seems a whole lot like “Cowboys and Aliens” but instead of Cowboys you have Battleships. And instead of Daniel Craig, you have Taylor Kitsch. 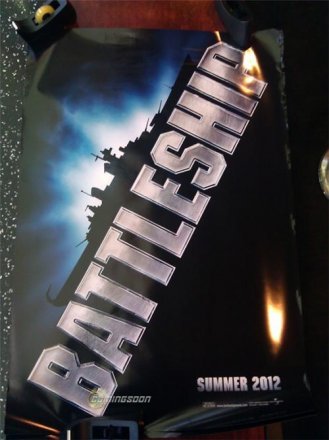