Being “otaku” instead of a geek for a day, YouBentMyWookie attends our first ever anime convention at the San Jose Convention Center over Memorial Day weekend. 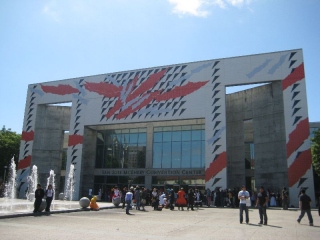 FanimeCon kicked off this Memorial Day weekend and despite its small stature, it celebrated its fifteenth anniversary and appears to be in no danger of ever slowing down. Like Toys ‘R’ Us, a place where a kid can be a kid. FanimeCon is a safe haven for anime and manga enthusiasts and cherishes its close knit friendly-family style atmosphere. After all, it does pride itself on the slogan, “By Fans, For Fans.”

YouBentMyWookie had the chance to scour the floors of FanimeCon this year, and while we’re no strangers to cons, this was our first full fledged anime convention experience. Yes, FanimeCon de-virgined us and we’re not ashamed to admit it. Because of this, we also made the pledge to thoroughly embrace the experience, and did so by taking in all the sights as well as getting to know some of the con attendees. What better way to understand a culture than to speak with those who live and breathe it, right?

Like most cons, FanimeCon has the usual exhibits and comradery one comes to expect. However, unlike other cons where cosplay is a coincidental bonus, FanimeCon relies heavily on cosplay with it existing as a fixture and an integral part of America’s booming Japanese inspired manga culture. In other words, it’s tradition and it’s a whole lot of silly unadulterated fun. Besides, other than Halloween when does one get the opportunity to dress up as their favorite anime character? There’s certainly no better way to show off ones fandom, earn some hardcore geek creds, or possibly impress someone of the opposite sex who’s just as into anime and manga as you.

There was absolutely no shortage of costumed attendees this year. The minute we arrived we were greeted by the sight of cosplayers in droves gathering outside and near the entrance of the lobby. The sight was both magnificent and frightening all at the same time.

This must have been what Dorothy meant when she told Toto that she didn’t think they weren’t in Kansas anymore.

Because we were basically transported to a different world, either that, or a MMO mystical universe had suddenly come to life. French maids and girls in Gothic Lolita outfits were a plenty, and just about everyone carried ridiculously oversized weapon that could easily end all of nature’s creations. We took plenty of photos and tried our best to follow the proper photo etiquette, which meant not trying to sneak “upskirt” or panty shots. 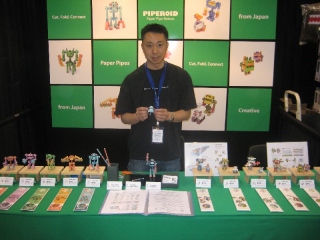 As we made our way inside, we visited the different exhibit halls that housed the artist ally, dealers, and gaming. At one of the booth we ran into Shinya Fujimoto, the U.S. distributor of Piperoids, a series of collectible paper craft robots originally designed and produced in Japan by Takashi Tsunoda. Piperoids are similar to origami (OK not really), and made entirely from paper pipes with pre-drilled holes and marks so you’ll know exactly where to fold, cut and connect pipes. Anyone can do it, and best of all, no tape or glue! Each papercraft robots are essentially little mini action figures with articulation, their own back story, and packaging. They’re basically pretty awesome.

Afterwards, we then headed toward FanimeCon’s authentic Akihabara-style maid café, which was just about to open and serve lunch. A long line of hungry attendees were already waiting as we arrived, and in line we spotted Street Fighter’s very own Chun-Li, who was apparently hungry after patrolling the con for Shadowloo goons to beat up. Having grown up in the era where Capcom didn’t know how to count pass “II,” we professed our love to her first and then grabbed a picture. With camera now in hand, we circled around to the front hoping to snap some pictures of maids in action. But when we got to the entrance, we were denied and turned away by the hostess. She told us we’d have to wait in line and we could only take pictures once we were inside. We asked if we could take a picture of her, since technically she was “outside.” But she still said no. Dejected, we then decided to go see what FanimeCon panels could offer, as well as give our tired feet some rest.

Of the three concurrent panels that took place, we ended up deciding to go sit in on the panel teaching how to create anime. It was essentially a crash course about how to make your own Flash anime, and in retrospect it was probably quite informative, but at the time we were just about ready to pass out from exhaustion. It was then that we decided that it’d probably be best for us to just call it day. Otherwise we’d end up disturbing the peace, as drooling snoring messes slumped over in our chairs.

On our way out, we ran into Aeris from Final Fantasy VII who was just arriving and sported a mighty large staff.

When we exited, the crowd outside was larger and more rowdy than ever before. Another manga meet was taking place for characters we were not familiar with and series we had never heard of.

Overall, FanimeCon was a unique experience. Unlike traditional cons which comprise of a variety of interests and people, FanimeCon featured collective attendees who all share a common fascination with anime and the Japanese otaku (geek) culture. In some ways, anime conventions are probably comparable to Star Trek conventions, where people cosplay as Trekkers and aliens, but with just more variety, outfits, kawaiiness (cuteness), and unimaginable weapons of mass destruction. FanimeCon’s slogan of “By Fans, For fans” certainly holds true, but don’t let it deter anyone from ever not wanting to attend, because while it may be “By Fans, For fans,” you certainly don’t have to be a fan to appreciate all the imagination, the creativity, and the friendly ambiance that makes for a perfect Memorial Day weekend getaway.

Enjoying our coverage and review of FanimeCon so far? Well, it’s not over yet! Tune in later this week for our special feature where we shadow a local band of cosplaying ladies at FanimeCon from sun up, to sun down. Get an exclusive inside look at the life of some cosplaying “rock stars.” Stay tuned, it’s not something you’d want to miss.