This girl is amazing. She’s beautiful, friendly and every bit the geek goddess that you’d expect to find here at Bent Wookie. 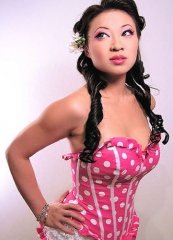 Welcome to You Bent My Wookie’s new Girl of the Month, Yaya Han! This girl is amazing. She’s beautiful, friendly and every bit the geek goddess that you’d expect to find here at Bent Wookie. There’s a good chance that cosplayers and con attendees have had the pleasure of meeting or at least seeing Yaya at a show somewhere in the world over the last few years. If you have then you already know how special she is. If you haven’t or you just want to get to know here better, just keep reading because you’re in for a treat.

Favorite book:
The Song of Ice and Fire Series. 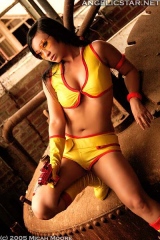 What is your favorite anime or Manga?
I am loyally attached to older titles such as “Record of Lodoss Wars”, “Escaflowne”, “Saint Seiya”, “Ranma 1/2”, “Cowboy Bebop”, “Rose of Versailles” and most Ghibli creations etc.

How do you feel about how anime is treated in American compared to how it is treated in Asia? What do you think needs to happen or stop happening for Anime to enter more into the mainstream?
Obviously anime is more mainstream in Asia because it originated from Japan and is now also widely produced in other Asian countries. I think America is actually doing very well in terms of growing the anime scene and pushing it toward the mainstream media. It goes along with the broadly accepted video game industry and popularity of American comics – many recent movie hits have been comic book or/and video game adaptations and a few Japanese shows are now being picked up for movie deals as well. I think we’re on a good road and it will just take a number of more years to catch up to Asian.

I can see where it can be tough to understand the difference between anime for children and anime for adults because in this country most people associate animation with kids.

Who is your favorite anime character?
Sharon Apple – Macross Plus It’s an amazing show, I just love the character of Sharon.

Do you read comics?
I used to read a lot of manga but these days I only go for select titles of Japanese and American comics. I just don’t have time to keep up with a lot of them anymore. In general I actually like reading the comics more than watching the anime adaptations. 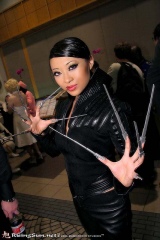 Who are your favorite artists?
For fantasy art it’s Nene Thomas who I love and admire, and for Japanimation it’s Masamune Shirow.

How did you get started making costumes?
Before I ever knew Cosplay existed, I was a big anime/manga fan and avid artist. When I attended my first anime convention in 1999, throughout the weekend I kept seeing people dressed up as these cool anime characters! It really inspired me to expand my artistic interest into making costumes. I learned how to sew my first garment with the help of a friend and from that point on I was on my own, learning by making lots of mistakes and being obsessively determined. I worked really hard on each costume and got into the performing side of things by entering contests with friends. We won a lot of awards and after almost two years I started getting asked to judge contests and be a guest at conventions. Now it’s 9 years later and I am working as a freelance costume designer and model. I am currently involved in the TV Show “Desert Foxes” as the lead costume designer and one of the lead actresses. I am also still traveling to conventions world wide as guest and/or vendor.

How can people get their own Ya Ya original?
Well, there are some ways :)… I offer signed photos on my website:http://angelicstar.net/store2.html
I sell hand made cosplay accessories and angel wings which you can order here:
http://angelicstar.net/angelwings.html
And I am in the Hot Pirate Babes 2009 Calendar:
http://hotpiratebabes.com/calendar2009.html 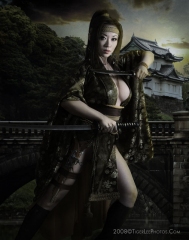 Who is your favorite Superhero? Tony Stark – Ironman, and it’s a toss up between Catwoman and Poinson Ivy!

What are some of your hobbies?
Drawing/painting, sewing, costume and fashion design, singing, reading, traveling, caving, movies, hiking, shopping…

What was your first costume?
I count two costumes as my first true Cosplay experience, which was for A-kon 2000 when I made Mill-chan from “Maze” and Mana from Malice Mizer’s “Au Revoir” video simultaneously. Both were a great challenge because I really didn’t know what I was doing and had to experiment with making up patterns, dye, lining, wig styling and cutting, appliqués etc. before I ever learned about any of the above. But I think it was the trouble-shooting aspect that got me hooked on Cosplay after all.

What’s your favorite costume of all time, and why?
I honestly don’t have a all time favorite.. a lot of cosplayers are associated with one or two characters and they made a billion versions of that chara’s costumes… but I am all over the place and love variety in designs. The following ones were especially fun to make or fun to wear: Baelfir the Fire Fairy because I put so much time and love into the costume, even when I had no idea what I was doing. I would like to re-make this costume with the knowledge I have now. Lady Deathstrike because it is so fun to take fighting photos with everyone at conventions! Lulu because I worked so long on this costume. Felicia because I like my wig and paws, and it’s such an upbeat character; you’re always in a good mood when you wear the costume!

What would your dream costume be?
I don’t want to give that away! I have many fabulous plans. Plus, if I focused on a “dream” costume and then made it, where would I go from there? It’s better to leave my goals open and unlimited.

What’s the weirdest thing that’s happened to you at a convention?
A lot of weird stuff happens at a con. One of the recent incidents I remember was when I got asked by a guy at a convention for a photo while he lays on the ground and I stand on his back lol. I was wearing heels and declined, as it was way too weird and also could have been painful! 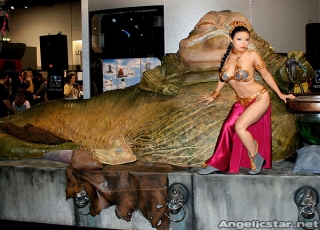 You spend a lot of time dressed as super heroes and anime characters, if you were an actual hero, what would your super power be?
Definitely pausing time. I am always short on time and the ability to stop everything for a bit and kick back my feet would be so welcomed!

You must get hit on a lot at shows. What was the most memorable pick up attempt that you’ve experienced?
I don’t particularity try to remember all the awkward, embarrassing and weird people situations I’ve walked into lol. I meet a ridiculous amount of people and find myself in many rapid fire good and not so good moments every weekend. It’s like BAM! What the hell was that? In my experience, the best way to deal with it all is by staying professional and polite and let things roll off your back. I don’t dwell on the pick up attempts or talk much about them – to me it’s a bit tacky and boastful, like why should all my friends have to hear about the millionth fanboy who hit on me?

That being said, I am not all work and no play! If you really wanna know, yeah I’ve been proposed to in a variety of interesting ways in multiple countries, sweet talked by drunk celebrities, and gotten very interesting gifts and even more interesting cosplay character suggestions.

Do you have any advice for the cool, yet geeky guys out there that just can’t seem to find a woman who appreciates their love of anime, comics or toys?
The biggest advice is don’t try so hard. Stay cool. Don’t be obnoxious or an attention monopolizing “World Man” with stories better than everyone else. Be courteous and funny, not overbearing. Smell nice and groom yourself. Be yourself, even the geeky sides.

What projects do you have coming up and where can people go to see you online or at live events?
I have a schedule that’s filling up fast – check out my event appearance list here.

If you guys want to see me at a show not listed yet, get the convention organizers in touch with me through my booking page.

And I will be updating my website regularly with photos, new costume galleries and event reports, so come back!

A special thanks to Yaya Han for taking time out of her busy schedule to talk to us. Now, scroll down and check out the amazing gallery of YBMW’s Girl Of The Month!

One thought on “Yaya Han: YBMW’s Girl Of The Month”