Own Your Very Own Cheshire Cat

… Just don’t get it wet or feed it after midnight. 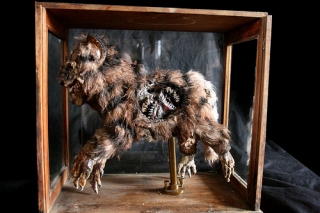 I’ve seen some pretty weird things for sale in my day, but this takes the cake.

“The preserved corpse of a non corporeal entity, manifested as solid by the will of those who enter non linear planes of existence. Its aesthetic similarity to the common cat is mere illusion, for the creature contains no bone and no organs”.

Ok, this thing is down right creepy. Sure its really cool, but I’m not sure that I’d want this kind of thing in my house. That means a lot coming from someone who once bought a haunted whistling clown statue at silent auction. I got it cheap because the owner “wanted it out of her god damned house before she threw it in the fire place.” Thank you Miss Notaro.

Anyways, back to the Cheshire cat. It was created by Alex CF, an artist who specializes in Cryptozoological scientific art. He describes the piece as:

A large wooden/ glass display cabinet, contained within, the taxidermied corpse of an extra dimensional entity known as “The Cheshire cat”. We can only hypothesize to the nature of this creature – whether it indeed was sentient, able to talk – or the physical manifestation of unconscious thought. either way, dissections were carried out to discern its internal organs, which were entirely absent.

Alex has also developed a full narrative to accompany this horrifying piece of art.

In the early 1850’s, a theoretical physicist by the name of Henry O’malley was emitted to the Borough of Charlston County hospital, with severe wounds to his face and hands. He was in a state of severe shock and began to rant and rave as the nurses tried to calm him. He was sedated and his injuries treated, yet he had not made a full recovery from his bout of hysteria. He was sectioned and sent to the Beverley asylum, in somerset.

There he was treated by the venerable psychiatrist Dr.Howard Keith. For three months he would not say a word, he would eat very little, and horde almost everything placed before him. His medication was cut to see if this was altering his behaviour, but nothing seemed to stem the awkward stare into the corner of his room, the muteness or his inability to comprehend his situation.

Until one morning, a steward knocked on the door of Dr. Keith and presented an altogether different Henry O’malley. “I wish to discuss my predicament, my research, and the reason for my lapse in judgement” exclaimed Henry, with this he began a tale that would have filed itself neatly between the cases of all the other inmates, if it hadn’t been for his final words.

To check out the rest of the story and to find out how you can actually take home your very own cheshire cat, go to Alex CF’s Blog

One thought on “Own Your Very Own Cheshire Cat”