If you’ve been watching Mezco lately, then you’ve probably been drooling on your keyboards over their One:12 Collective line.

If you’ve been watching Mezco lately, then you’ve probably been drooling on your keyboards over their One:12 Collective line. The newest addition, a great variant has just been announced as a Previews exclusive Mezco: One:12 Collective Judge Dredd Exclusive Lawmaster Set. Check it out below. 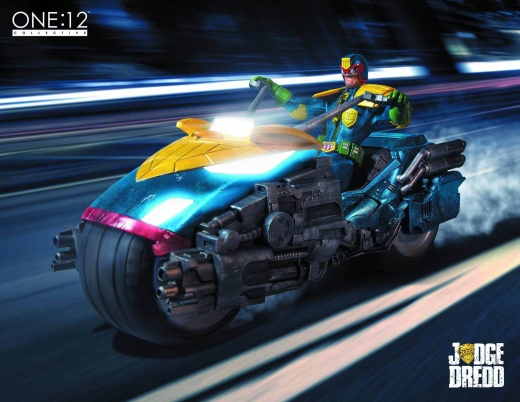 A PREVIEWS Exclusive! Ripped from Rebellion’s award winning comic is Mega-City One’s most notorious Street Judge, Judge Dredd. Some time in the near future Mega City One is part of what is left of a dystopian society and the law is upheld by Judges. Charged with the authority to act as judge, jury and executioner Street Judges are on the front line of maintaining order in a post apocalyptic world. Working closely with Rebellion, the One:12 Collective has crafted a finely detailed figure of Dredd with some truly amazing features, along with his Lawmaster Bike. The Judge Dredd figure has a comic accurate, digitally sculpted likeness, a specially silkscreened spandex uniform with a real working zipper to create a realism at this scale not seen before and numerous accessories as well as interchangeable parts.