Initially, he joked that the drink is a composite of red wine mixed with vodka, Vicodin, Viagra, Ecstasy and the blood of European royalty, but then admitted that “we couldn’t make synthetic blood for human consumption” and that “It’s actually a very tasty blood-orange soda.”

Tru:Blood tasty blood-orange soda will be available September 10th, just in time for the season’s finale.

Also, although season 3 has not been confirmed, Ball is all but certain that the show will continue. And what can we expect? Werewolves of course! 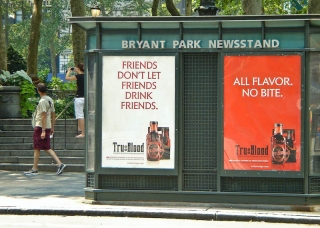