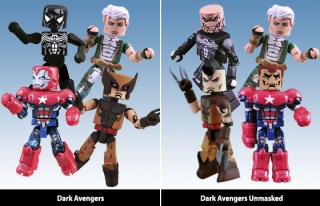 Toys R Us and Diamond Select Toys today announce a new opportunity for fans across the country to experience the excitement and wonder of San Diego Comic Con as well as to get their hands on the hottest new exclusive featuring the current stars of the Marvel Comics Universe!

Still reeling after the stunning events of the Secret Invasion, the Marvel Universe was turned upside down by the whirlwind success of Norman Osborn and his Dark Avengers. With their stolen legacies and costumes deceiving the general public, these new “heroes” have swept the nation along with their message – He Lost. They Won. Accept Change. Now they’re invading your collection with the first Dark Avengers Minimates box set – featuring Norman Osborn as the Iron Patriot, Marvel Boy, Venom as Spider-Man and Daken as Wolverine!

Launching this July, the first-ever Toys R Us San Diego Comic Con exclusive will be available nationwide in the form of the Dark Avengers Minimates! No longer requiring the travel to San Diego, we’re bringing this exclusive set directly to ToysRUs.com for a special event combining the biggest pop culture gathering of the year with the latest exclusive toys and collectibles. Fans lucky enough to attend San Diego Comic Con in person can also pick up this exclusive set by visiting Entertainment Earth’s booth (#2343) on the show floor.