Great new statues are on the way of Admiral Adama and Firefly’s Book.

I can’t believe it is already that time of the year where the exclusives for Comic Con are getting revealed. Today’s announcement comes from QMx and features statues from two of my favorite shows: Firefly and Battlestar Galactica. 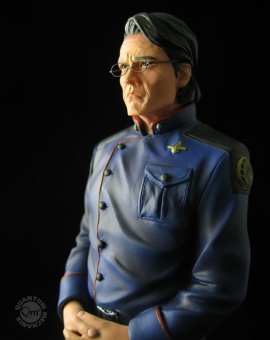 This hand-cast, hand-painted polystone statue shows the battle-weary Adama evincing strength and resolve in a moment of reflection, as he ponders his next step in humanity’s struggle for survival against the Cylons.

Adama stands on a circular base displaying Galactica’s phoenix emblem and is posed in a screen-accurate uniform.

Available in an edition of just 1,000 statues, each Admiral Adama Animated Maquette is individually numbered on the bottom of the base and also includes a numbered certificate of authenticity.

This Comic-Con exclusive piece is priced at just $59.95, so make sure to get on our waiting list now. Waiting-list customers will be able to order the Adama maquette before Comic-Con and have it shipped to their address after the show. 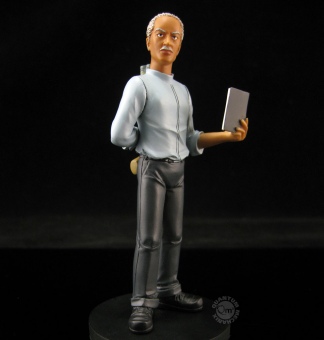 We know that the gentle Christian preacher in Firefly and Serenity has stolen another man’s identity. But what about Book’s VIP status with the ruling Alliance and his familiarity with space travel, firearms and hand-to-hand combat? He’s a mystery to the crew he travels with on the Firefly-class transport, Serenity.

QMx has captured the two contradicting sides of Derrial Book in this 4.5-inch, hand-cast, hand-painted maquette. The wry Shepherd holds a Bible in one hand and a shotgun behind his back — fully prepared for what might lie ahead.

Our Little Damn Heroes® Shepherd Book Maquette comes with a sleek black stand and is offered in a numbered, limited edition of 1,000 statues and comes with a certificate of authenticity.

This highly detailed, polystone creation is priced at $39.95, so make sure to get on our waiting list now. Waiting-list customers will be able to order the Book maquette before Comic-Con and have it shipped to their address after the show.