SDCC 2012: Warner Bros Comic Con Bags Are Back and Bigger Than Ever

Check out the images for this year’s Con bags from: TV’s Arrow, The Big Bang Theory, DC Nation, Fringe, Supernatural or The Vampire Diaries; Feature Films Man of Steel or Pacific Rim

If Comic Con was a birthday party, Warner Bros’s Comic Con bags would be the goodie bags. each year the demand for them grows more and more as they become one of the iconic collectibles that people hoard. This year Warner Bros will be releasing 130,000 bags for Arrow, The Big Bang Theory, DC Nation, Fringe, Supernatural and The Vampire Diaries, along with motion pictures Man of Steel and Pacific Rim. Below is the official release and pics of all the bags (except Man of Steel and Pacific Rim). We’ll update as soon as we get those pics. 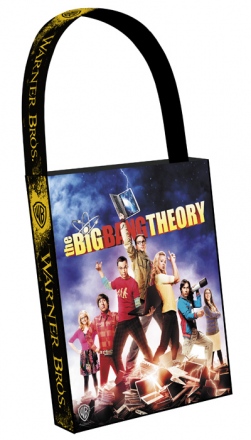 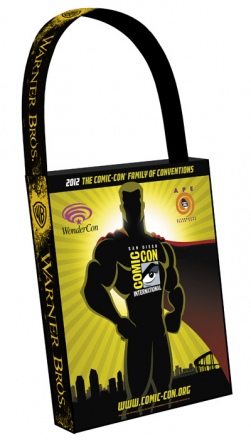 BURBANK, Calif. (July 9, 2012) — Warner Bros. Entertainment will again sponsor the official bag of Comic-Con International: San Diego 2012, the Studio announced today. By joining forces with Comic-Con for the third consecutive year, Warner Bros. will give each fan attending the Con an unforgettable keepsake from the world’s leading pop culture convention.

Over 130,000 of the oversized 24”x29” bags — which have been called Comic-Con’s “ubiquitous accessory” by Entertainment Weekly and “a must have” by Deadline Hollywood — have been produced and will be provided to Comic-Con attendees as they check in to the convention.
To download images of the TV series bags, as well as the official Comic-Con 2012 artwork side, click here: http://bit.ly/R7azfk
The 2012 edition will be a messenger-style bag with shoulder strap and, of course, a poster-protecting pocket.
Designed by Warner Bros. Worldwide Television Marketing, the bags feature double-sided artwork. Each will have the all-new Comic-Con 2012 official design on one side, with the other highlighting Warner Bros. titles, including TV series — live-action and animated — from Warner Bros. Television and Warner Bros. Animation, and upcoming theatrical features from Warner Bros. Pictures.
The featured TV titles are Arrow, The Big Bang Theory, DC Nation, Fringe, Supernatural and The Vampire Diaries, along with motion pictures Man of Steel and Pacific Rim
For continuing info on the Studio’s plans at Comic-Con, please visit www.thewb.com/comiccon and follow us on Twitter @TheWBdotcom (hashtag #WBSDCC). For official information about Comic-Con 2012, visit www.comic-con.org and follow Comic-Con on Twitter @Comic_Con.

More About Warner Bros.’ Comic-Con Bags
Created annually since 2006 by the Warner Bros. Worldwide Television Marketing unit specifically for Comic-Con, the highly sought-after totes provide devoted fans with a handy carrying case for all the merchandise they take away from the Con — and serve as mobile billboards for a selection of the Studio’s key Comic-Con titles.