While everyone is already talking about Warner Bros’ new SDCC convention bags and their detachable capes, there’s a tote bag heading to Comic Con this year that might be one of the coolest we’ve ever seen.

To help promote the Blu-ray release of OBLIVION next month, the concept artist for the film, Andree Wallin, has created a post-apocalyptic of the ruins of San Diego Comic-Con, 2017!

The bag will only be available at Geek magazine booth (#4014), and you can only get them with either a code from their Twitter account or from one of their panels. 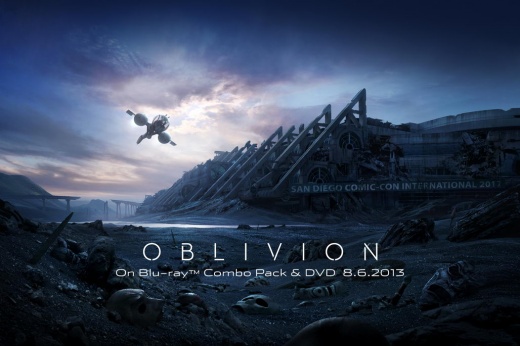 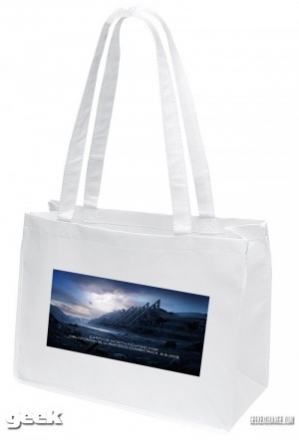 TOM CRUISE AND MORGAN FREEMAN STAR IN AN EXPLOSIVE
ACTION THRILLER FROM THE MAKERS OF
TRON: LEGACY AND RISE OF THE PLANET OF THE APES

A MUST-SEE IN HI-DEF AVAILABLE AUGUST 6, 2013
ON BLU-RAY™ COMBO PACK WITH DVD & DIGITAL INCLUDING ULTRAVIOLET™

Universal City, California, June 4, 2013 – On a desolate, nearly ruined future Earth, Tom Cruise (Mission Impossible Franchise) and Academy Award® winner Morgan Freeman (The Dark Knight Rises, Wanted) star in the ground-breaking cinematic event Oblivion, a visually stunning, post-Apocalyptic thriller. A glimpse of a perilous future from visionary filmmaker Joseph Kosinski (TRON: Legacy) and the producers of Rise of the Planet of the Apes, Oblivion is “unlike anything you’ve ever seen” (Moviefanatic’s Joel Amos), as one man confronts his mysterious past in a journey of redemption and discovery.

It is 2077 and Earth has been decimated. Jack Harper (Tom Cruise) is a drone repairman on the evacuated planet, working with his partner Vika (Andrea Riseborough) to salvage vital resources. As their assignment approaches its final days, Jack rescues a beautiful stranger (Olga Kurylenko) from a downed spacecraft, triggering a chain of events that forces him to question everything he thought he knew and leaves humanity’s fate in his hand. Intense, spectacular, and exciting (Scott Mantz, Access Hollywood), Oblivion combines a taut and original story with mind-bending special effects for an epic adventure that shouldn’t be missed.

The Blu-ray™ Combo Pack allows fans to view Oblivion anytime, anywhere on the platform of their choice. It includes a Blu-ray™ disc, a DVD, and Digital including UltraViolet™ for the ultimate, complete viewing experience.
· Blu-ray™ disc unleashes the power of your HDTV and is the best way to watch movies at home, featuring perfect hi-def picture and hi-def sound.
· DVD offers the flexibility and convenience of playing movies in more places, both at home and away.
· UltraViolet™ is a revolutionary new way for fans to collect their movies and TV shows in the cloud. UltraViolet™ lets consumers instantly stream and download to tablets, smartphones, computers and TVs, including iPad®, iPhone®, Android™ and more.
· Also includes Digital Copy.
Bonus Features on Blu-rayTM and DVD
· Feature Commentary with Tom Cruise and director Joseph Kosinski
· Deleted Scenes
· Promise of a New World: The Making of Oblivion—A comprehensive and thought-provoking multi-part feature covering the making of Oblivion, including:
o Destiny – Looks inside the conceptualization, development and pre-production of Oblivion and the planning that went into the Herculean task of shooting the epic film.
o Voyage – Follows the creation of the amazing Bubble Ship from its early design conception to its journey around the world. (Blu-rayTM exclusive)
o Combat – Explores the film’s ground-breaking action and death-defying stunts, all performed by one of the most popular movie stars in the world. (Blu-rayTM exclusive)
o Illusion – Focuses on the film’s post-production and dazzling visual effects.
o Harmony – Delves into the innovative musical world of M83.
· M83 Isolated Score—Watch the entire film accompanied by the evocative music track.

SYNOPSIS:
This groundbreaking cinematic event stars Tom Cruise as Jack Harper, the lone security repairman stationed on a desolate, nearly-ruined future Earth. When he rescues a beautiful stranger from a downed spacecraft, her arrival triggers a nonstop chain of events that forces him to question everything he knows, and leaves humanity’s fate in his hands. Academy Award® winner Morgan Freeman joins Cruise in this “visually stunning” (Pete Hammond, MOVIELINE,) explosive story from the director of TRON: Legacy and the producer of Rise of the Planet of the Apes.