The figures will debut at the Electronic Entertainment Expo (E3), taking place at the Los Angeles Convention Center from June 7-9, 2011. 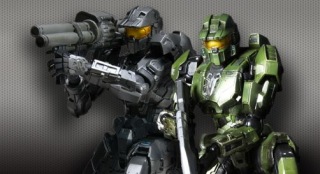 Square Enix, Inc., the publisher of SQUARE ENIX® interactive entertainment products in the Americas, announced today a series of premium quality action figures including Master Chief from the popular Halo® universe. In commemoration of the tenth anniversary of the HALO franchise, Square Enix Products expands the HALO action figure line beyond the successful HALO: REACH PLAY ARTS® -KAI- series in a continued collaboration with 343 Industries.

HALO: COMBAT EVOLVED PLAY ARTS -KAI- MASTER CHIEF (Envisioned by Square Enix Products) is an original take on Master Chief based on the iconic character from Halo: Combat Evolved. The beloved character is re-imagined with sleek lines common to the sci-fi style, iconic of other Square Enix products. While the characteristics of Master Chief remain true to the original video game, the added details and minor alterations result in delicately crafted parts with unmatched realism. The robust build adds a sense of fictional reality and massiveness present in Japanese sci-fi entertainment.

The figures will debut at the Electronic Entertainment Expo (E3), taking place at the Los Angeles Convention Center from June 7-9, 2011. Visit booth 1649 for a first look at Square Enix Product’s rendition of the beloved character, sure to be a collectible in the growing line-up of HALO action figures by Square Enix.