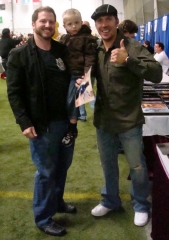 One of our readers, xnoybis, headed out to Steel City Con this past weekend and wanted to share some pics from the trip. Looks like a pretty good show. If you go to any conventions or shows and want to share your experiences with us, just let us know by sending a not through our “submit” page.

About Steel City Con:
Steel City Con, also known as the Pittsburgh Toy, Comic and Childhood Collectibles Show, was held October 24th, 25th, and 26th. Celebrating its 19th year, this was the first time the show was held in a new location at the Pittsburgh Indoor Sports Arena. With 90,000 sq ft of convention space, Steel City Con now holds the title of biggest toy show in the United States.