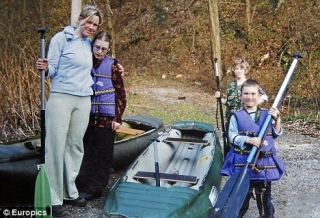 A court in Brno, Czech Republic has sentenced a cannibal cult mother, Klara Mauerova, 31, to nine years in jail for torturing her son in a locked cellar while relatives skinned him and forced him to eat his own flesh.

A member of the religious cult, Grail Movement, both Klara and her sister Katerina, 35, were found guilty of torturing Klara’s eight-year-old son Ondrej and his ten year-old brother Jakub.

The two boys told judges that they were kept in cages and that their mother and relatives had partially skinned Ondrej and forced him to eat his own flesh. As well as stubbing cigarettes out on their bare skin, whipped them with belts, and tried to drown them. They were also sexually abused and forced to cut themselves with knives.

The Grail Movement cult is claimed to have hundreds of followers in Britain as well as tens of thousands of others world wide.

The abuse was discovered when a neighbor installed a TV baby monitor to keep watch on his new daughter. It picked up however, signals from an identical monitor next door showing one of the victims beaten, naked and chained in a cellar.

Mauerova had installed it so she could gloat over her victims’ suffering from the comfort of her kitchen.

The defendants are expected to launch an appeal.