An extremely rare figure (only 20 made) of the Barry Sanders is being randomly inserted into cases as they are shipped to retailers nationwide.

According to McFarlane Toys, an extremely rare figure (only 20 made) of the Barry Sanders is being randomly inserted into upcoming NFL Legends Series 5 cases.

From the press:
“After the overwhelming response to the Babe Ruth “super chase” figure we had to offer a new “golden ticket” for our NFL fans. Barry Sanders has been and will always be a fan favorite. Most fans remember Barry wearing the number “20” which has lead us to create 20 “super chase” figures.

These figures will feature blue pants worn by the Detroit Lions for only one season. The packaging is sealed with the blue McFarlane logo tape. In order to ensure authenticity, the number on the NFL hologram sticker has been recorded. Once these rare figures have been found, McFarlane Toys will be able to verify the authentic pieces.”

This is indeed a big surprise for fans and collectors!! Check out the image below. 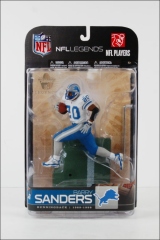