What do you get for the Star Wars fan who has everything? How about a 40 card set of Topps Star Wars card, where every card in the series is autographed? The set, which is set to hit the market in the 4th quarter of 2017 is called: Topps Star Wars Stellar Signatures, and every single one of the 40 cards of the set are autographed, including cards from Carrie Fisher and Kenny Baker, who signed stickers before their deaths that will be attached to their cards.

The set is going to be hyper limited, with only 100 boxes being made for the entire collection, and each card will come sealed in a special case with a special Star Wars seal. While we still don’t know the full roster of stars who have lent their names to the set, we do know the following are definitely included: Carrie Fisher and Kenny baker (as previously mentioned), Felicity Jones, Tim Curry, Hayden Christensen, Billy Dee Williams, Daisy Ridley, Forest Whitaker, Sarah Michelle Gellar, Ian McDiarmid, Ray Park, Matthew Wood, Alan Tudyk, Temuera Morrison, Ashley Eckstein, Gwendoline Christie, Warwick Davis, and Brian Herring. 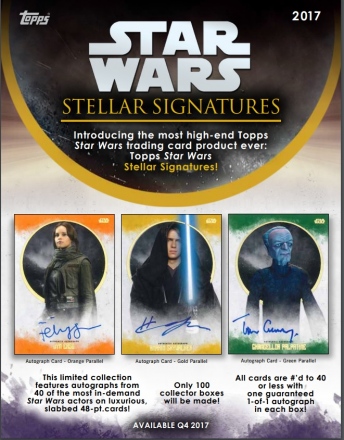 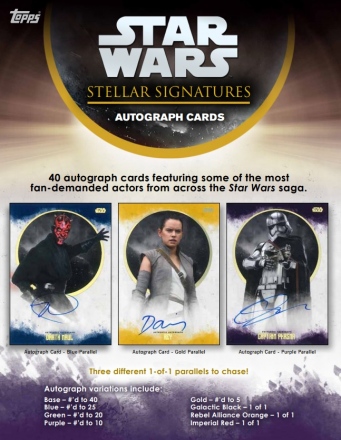 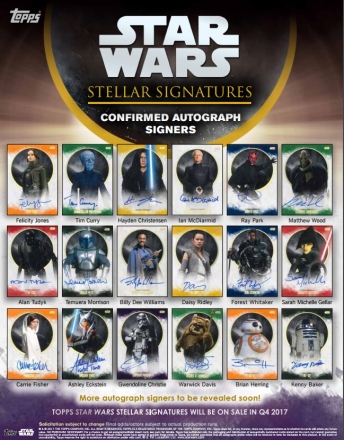