This counts as a spoiler. If you don’t want to know, don’t click on the link… but admit it. You want to know. Go head, click it… you know you want to. 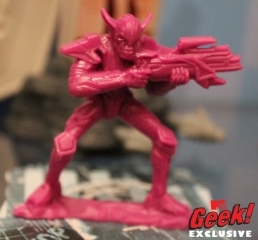 During their tour of the Jakks Pacific booth at Toy Fair, The MTV geek folks stumbled on a major spoiler for Marvel’s Avengers hidden in the pieces of an upcoming board game for the movie. It seems like those pink, unpainted prototype characters on the board are none other than….

OK, this isn’t really that shocking. No one really though they’d bring in something as obscure as the Badoon for a movie that requires acceptance by more than just us comic book nerds. Still, we finally have the info.

Another tid bit is that the box for the game states that it is the “Battle For The Cosmic Cube!”