Hasbro is finally getting their turn at the world of Star Trek! Details after the jump.

If you love the Hasbro Star Wars Figures, get ready because they are set to take over the the Star Trek license. You won’t be able to buy any toys until the next Star Trek film is released on May 17, 2013, but then you’ll be able to get role-play, action figures and Kre-o figures.

If the model holds true then we can expect to eventually see a super hero squad type set of toys and then, eventually, a Star Trek for kids show on The Hub. 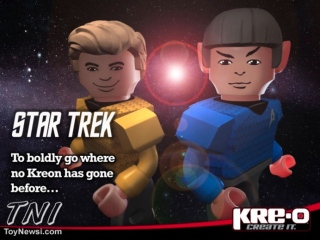 Here’s the official release
PAWTUCKET, R.I. — Hasbro, Inc. (NASDAQ: HAS) announced today it has entered into agreement with CBS Consumer Products to manufacture and globally market a variety of products based on the STAR TREK property beginning in 2013. The toy line will launch in support of the STAR TREK movie sequel from Paramount Pictures, which will open May 17, 2013.

Leading the product offering from Hasbro will be a line of premium KRE-O STAR TREK building sets featuring fantastical spaceships and legendary characters from the franchise. The KRE-O STAR TREK sets will offer high-quality KRE-O bricks as well as new KREON figures in the likeness of popular characters. Among its additional new play experiences, Hasbro will also offer robust line of roleplay toys for kids and fans to act out the intergalactic saga as well as select new figures.

“The STAR TREK property is an entertainment giant known by millions across the globe and Hasbro is thrilled to be working with CBS Consumer Products to bring the franchise to life in toy form,” said John Frascotti, chief marketing officer, Hasbro, Inc. “As a global branded play company, Hasbro delivers the best properties in a variety of formats to consumers around the world. We’re excited to offer fans the opportunity to experience icons of STAR TREK in exhilarating new ways with our KRE-O building sets as well as with new roleplay items and more.”

“Hasbro and STAR TREK have always been known as innovative brands,” said Liz Kalodner, Executive Vice President and General Manager of CBS Consumer Products. “Bringing them together in this new toy line will give fans of the entire STAR TREK franchise new ways to experience the final frontier, including the first complete construction program.”

STAR TREK will mark the third major entertainment property to be featured in the KRE-O line from Hasbro. The Company successfully introduced the KRE-O brand in 2011 with building sets featuring its globally popular TRANSFORMERS characters. In 2012 Hasbro continues the KRE-O TRANSFORMERS line and is introducing KRE-O BATTLESHIP building sets based on its gaming property and upcoming live action movie BATTLESHIP, from Universal Pictures. More details about Hasbro’s STAR TREK product offerings will be announced at a later date.