Straight from Toy Fair 2012 and courtesy of MTV-Geek, here’s your first look at AMC’s “The Walking Dead” Season 2 DVD case designed by McFarlane Toys! More disgusting zombie bust than case, this exclusive edition features a screwdriver-skewered zombie head atop the show’s logo. The head can be opened to reveal the Special Edition Blu-Ray nested within its neck! It’s unique, it’s over the top, it’s disgusting. I must have it. I’m sure any dead head would agree.

Also, don’t forget, the second second half of season 2 for AMC’s “The Walking Dead” returns this Sunday night with all new episodes! 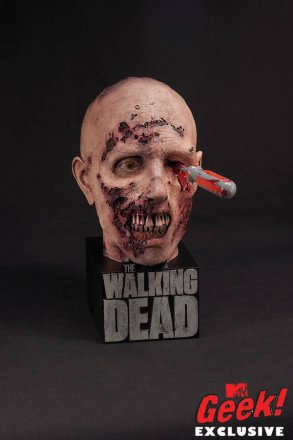