Toy Fair 2012 is underway and Hasbro has released some high res press images of upcoming Marvel Universe figures in 2012.

Toy Fair 2012 is underway and Hasbro has released some high res press images of upcoming Marvel Universe figures in 2012. Fans can expect at least three new waves and an Avengers Team 3-pack.

Wave 3
Puck with Snowbird, Angel, Hercules and Nova and Nighthawk.

From the official press release:
MARVEL UNIVERSE 3.75-Inch Action Figure Assortment
(Approximate Retail Price: $8.99; Ages 4 & up; Available: Spring 2012)
The MARVEL UNIVERSE 3.75-Inch Action Figure line is where you can find exceptional articulation, poseability, and spot-on design across an astonishing range of MARVEL COMICS heroes and villains. This year’s lineup of great classic characters from the MARVEL COMICS universe features heroes and villains from various teams like THE AVENGERS, THE INHUMANS and ALPHA FLIGHT. Fans can update their collections with the latest and greatest from Hasbro! Each figure sold separately.

MARVEL UNIVERSE – MASTERWORKS SENTINEL With WOLVERINE
(Approximate Retail Price: $49.99; Ages 4 & up; Available: Spring 2012)
One of the biggest, baddest villains in the MARVEL UNIVERSE is back and he’s ready to take out the X-Men! THE SENTINEL figure measures a monstrous 17 inches tall and is packed with electronic features including a huge bank of battle sounds. Also includes a 3.75-inch WOLVERINE figure so that you can stage the first battle as soon as you open the box! 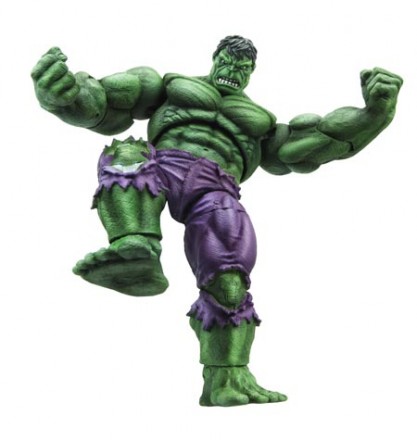