Ray won every section and blew away the competition 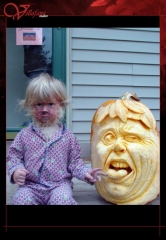 Congratulations to Ray Villafane, a sculptor for DC Comics on his win Sunday night on the Food Network’s Pumpkin Carving Challenge. The six and half hour event pitted four pumpkin carvers against each other in a three part competition. Part one involved a traditional Jack o Lantern. Part two: 3D sculpture. The final part, which was worth half of the points was the freestyle competition. Ray won every section and blew away the competition. Not only did he get bragging rights and a neat little medal, but he also got a check for $10,000 dollars. Congratulations Ray. Keep making awesome figures and awesome pumpkins

Check out some of Ray’s amazing figure and sculpture work: