Toynami has revealed their upcoming 9″ talking Bender. Bender Bending Rodriguez is a Unit 22 Bending Unit robot. A heavy drinker and smoker for mechanical reasons, he pathologically steals, cheats, and lies for fun. Somehow, in spite of his surly sociopathy and his rampant insults, Bender counts among his best friends the humans and aliens of Planet Express, and this deluxe 9″ tall articulated action figure plays some of Bender’s best quips so he can insult you, too!

Bender will come in a window box packaging and is expected to be released in May 2011. 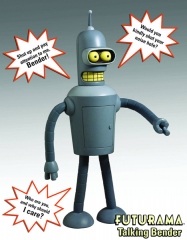