The masked vigilante Rorschach, presented here as a Toys ‘R’ Us exclusive 7″ action figure, sets out in the Watchmen movie to uncover a sinister plot. As he reconnects with his former crime-righting legion, Rorschach glimpses a wide-ranging and disturbing conspiracy with links to the past and catastrophic consequences for the future. The mission is to watch over humanity….but who is watching the Watchmen?

The Rorschach action figure stands on a customized base and is in a firing pose. It is articulated at the shoulders, elbows, wrists, and neck, and rendered from highly detailed molded plastic. The package includes the Rorschach collector action figure, prisoner number on a real chain, stand with mounts, gun, and extra hand. Weight: 4 oz. 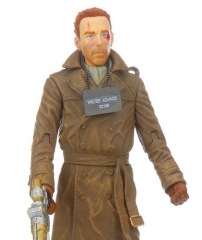