YBMW has a Brian Yuzna / John Penney signed script of ‘Return of the Living Dead 3’ and we want to give it to one lucky reader!!! 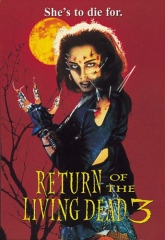 Because we here at YBMW love Halloween and monster movies we have brought you another AMAZING giveaway contest! We have on our hot nerdy hands a signed script of ‘Return of the Living Dead 3: Ashes to Ashes’ The script is signed by Director / Producer horror icon Brian Yuzna (From Beyond, Re-Animator, Warlock, and many other films!) and writer John Penney (The Kindred, Zyzzyx Rd, Shadows) a long time staple in genre film writing and directing.

Brian and John would like us to mention that they are in the process of putting a project together and when we have more details on that you’ll see them here! 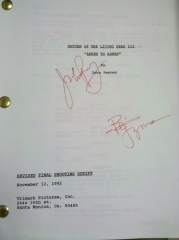 The script is a copy of the final shooting script and John and Brian signed it in red to show in the pictures that this isn’t just a photocopy (pretty sweet of them I think). For anyone that’s seen this film it’s a fun gore fest that has the incredibly hot Melinda ‘Mindy’ Clarke (Nikita, Entourage, The Vampire Diaries, Chuck, Ghost Whisperer, The O.C.).

Check out the trailer for ‘Shadows’ John Penney’s newest film as writer / director and we’ll have a review and video interview up soon with John about his latest spooky outing into the dark ghost world on the other side.

Seriously try get this collectible at all costs! It’s awesome and I really wanted to not even offer it on the site but then I think Brian and John would have punched me in the nuggets since they took the time out to sign the script for all you fans!

TO WIN THIS GREAT COLLECTIBLE FOLLOW THE STEPS BELOW:

No purchase is necessary. The winner will be selected randomly from all valid and correct entries. ‘‘Return of the Living Dead 3 signed script’ giveaway ends Nov 10th, 2011